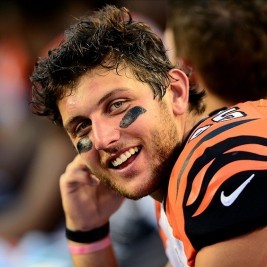 Businesses, Non-profit organizations, event planners and companies across the country have worked closely with our booking agents to hire Tyler Eifert for a speaking engagements, guest appearances, product endorsements and corporate events. Many of those same clients have continued to turn to our speakers bureau as we can easily align Tyler Eifert’s availability with their upcoming seminar, gala, annual conference, corporate function, and grand opening. Our close relationship with Tyler Eifert’s booking agent and management team further enables us to provide inquiring clients with Tyler Eifert’s speaking fee and appearance cost.

If your goal is to hire Tyler Eifert to be your next keynote speaker or to be the next brand ambassador our celebrity speakers bureau can assist. If Tyler Eifert’s booking fee is outside your companies budget or your unable to align with his appearance availability, our booking agents can provide you a list of talent that aligns with your event theme, budget and event date.

Tyler Eifert was born September 8, 1990 and is a tight end currently for the Cincinnati Bengals of the National Football League. He was drafted 21st overall by the Bengals in the 2013 NFL Draft. He played college football for the Notre Dame Fighting Irish. As a freshman in 2009, Eifert played in only one game after suffering a back injury. As a sophomore in 2010 he entered the season as a backup to Kyle Rudolph, but took over as the starter after Rudolph suffered a season ending injury. He finished the season with 27 receptions for 352 yards and two touchdowns in 11 games. In his junior season, he took over the starting position. As a starter, Eifert had 63 receptions for 803 yards and five touchdowns. He broke the school's tight end single season receptions and receiving yards record, previously held by Ken MacAfee. He was named a 2011 Mackey Award finalist, but did not win the award. As a senior, he had 50 receptions for 685 yards with 4 touchdowns. He also won the 2012 Mackey Award after being named a finalist the year before, and was also named second team All-American by the Associated Press. After a 42-14 loss to the Alabama Crimson Tide in the 2013 BCS National Championship Game, Eifert decided to forego his final season of eligibility and declared his intentions to enter the 2013 NFL Draft.