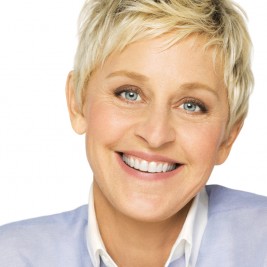 If your goal is to hire Ellen DeGeneres to be your next keynote speaker or to be the next brand ambassador our celebrity speakers bureau can assist. If Ellen DeGeneres’s booking fee is outside your companies budget or your unable to align with his appearance availability, our booking agents can provide you a list of talent that aligns with your event theme, budget and event date.

Whenever Ellen DeGeneres' friends put together a show or party, DeGeneres was asked to do a comedy routine. She did an act and was soon asked to perform as a stand-up comedian at small clubs and coffeehouses, and eventually became the emcee at Clyde's Comedy Club. While working at Clyde's in 1981, DeGeneres recorded her club performances.

After traveling around the United States performing her comedy act, she was chosen in a national competition in 1982 by the cable channel Showtime as the funniest person in America. She then appeared on late night television and comedy programs.

Soon afterward, DeGeneres was invited to perform on the Tonight Show by booking agent and producer Jim McCawley for her first appearance in 1986. She was the first woman to ever be asked over to the couch to visit with Johnny Carson on her first visit. Jim McCawley truly believed that she was going to be a hit and often spoke in praise of her when her name was mentioned.

She also appeared as a stand-up comedian as early as on the HBO Tenth Annual Young Comedians special, where she was introduced as an up-and-coming talent by Young Comedians show veteran Harry Anderson.

Before getting her own show, DeGeneres began her television career on the short-lived TV sitcom Open House (1989-1990) and Laurie Hill (1992).

DeGeneres has also performed two HBO stand-up specials. The first was called Ellen DeGeneres: The Beginning (2000) and was taped live at the Beacon Theatre in New York City. Her most recent one, which was taped in the same location, was entitled Ellen DeGeneres: Here and Now. After she began her talk show, Degeneres said she would no longer do stand-up shows and tours.

Her comedic style has been compared to stand-up legend Bob Newhart. Along with her brother Vance she was raised as a Christian Scientist until the age of 13. Betty moved out on April 3, 1972, and it was Elliot who filed for separation on December 4, 1973. The divorce however was finalized in January 1974. Shortly after the divorce her mother married Roy Gruessendorf, a salesman, and moved from the New Orleans area to Atlanta, Texas. DeGeneres graduated from Atlanta High School on May 21, 1976.

DeGeneres moved back to New Orleans to attend the University of New Orleans, where she majored in communications. After one semester, she left school to do clerical work in a law firm. She also held a job selling clothes, including dresses, at the chain-store the Merry-Go-Round at the Lakeside Shopping Center in New Orleans. Other working experiences included being a waitress at TGI Friday's and another restaurant, a house painter, a hostess, a bartender, and an oyster shucker. Finally, DeGeneres realized she didn't want to "answer to a boss" and started to figure out what she really wanted to do.