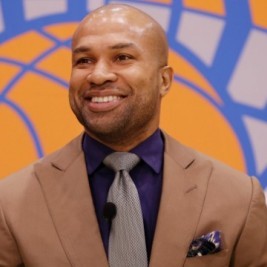 Businesses, Non-profit organizations, event planners and companies across the country have worked closely with our booking agents to hire Derek Fisher for a speaking engagements, guest appearances, product endorsements and corporate events. Many of those same clients have continued to turn to our speakers bureau as we can easily align Derek Fisher’s availability with their upcoming seminar, gala, annual conference, corporate function, and grand opening. Our close relationship with Derek Fisher’s booking agent and management team further enables us to provide inquiring clients with Derek Fisher’s speaking fee and appearance cost.

If your goal is to hire Derek Fisher to be your next keynote speaker or to be the next brand ambassador our celebrity speakers bureau can assist. If Derek Fisher’s booking fee is outside your companies budget or your unable to align with his appearance availability, our booking agents can provide you a list of talent that aligns with your event theme, budget and event date.

Head coach of the New York Knicks, Derek Fisher is a 1992 graduate of Parkview Arts and Science Magnet High School in Little Rock, Arkansas, and attended the University of Arkansas at Little Rock. He was selected 24th overall in the 1996 NBA Draft by the Los Angeles Lakers, and spent his first eight seasons with them. He averaged double digits in points in three different seasons (2000-2001, 2001-2002, and 2002-2003) and won three consecutive NBA championships with the team. An underrated part of the supporting cast behind superstars Shaquille O'Neal and Kobe Bryant, Fisher played a vital contribution to the 2000-2001 playoff run, which the Lakers stormed through with an NBA record 15-1 mark.

However, Fisher's finest playoff hour came in Game 5 of the 2003-2004 Western Conference Semifinals between the Lakers and the defending champion San Antonio Spurs. With the series tied at two games apiece, Game 5 was a tight affair. Neither team was willing to give the other the lead in the series, and the Lakers wanted to avoid a Game 7. With 11 seconds remaining, Kobe Bryant hit a jump shot to put the Lakers up 72-71. The Spurs, needing last-minute heroics, thought they clinched the game when Tim Duncan somehow made an 18-foot shot despite falling away from the basket and solid defense from Shaquille O'Neal. The Spurs led 73-72 with 0.4 seconds on the clock. After three time-outs, Gary Payton found Fisher, who managed to catch, turn, and shoot to win the game. Fisher sprinted off the court because, he later admitted, he himself wasn't sure he had beat the buzzer, and wanted to get off the floor before the play could be reviewed. The Spurs immediately filed a dispute regarding the shot anyway and, after reviewing video footage of the play, the referees concluded that the ball had indeed left Fisher's hand before the clock expired. The "0.4" basket counted and the Lakers had won.

Fisher was nicknamed "The Fish that Saved L.A" for the play and was credited with saving the championship run, for losing the game would have extended the series to seven games, which would have put undue strain on the Lakers. The Lakers went on to close out the series with a fourth victory to defeat the Spurs. They went on to defeat the Minnesota Timberwolves to clinch the Western Conference championship, but were upset in the NBA Finals by the Detroit Pistons 4-1. That memorable season was Fisher's last with the Lakers.

After the 2004 season, Fisher became a free agent. Although Fisher was popular, the Lakers saw him as a role player. With Gary Payton and Karl Malone also on the team, Fisher was also removed from the starters list to the bench and playing 18-20 minutes a game. The Lakers also offered him $15 million over three years. In contrast, the Golden State Warriors offered Fisher $37 million over six years and guaranteed him the role of the team's starting point guard.

In addition to those factors, the Laker team that Fisher had played with completely split apart. Head coach Phil Jackson had retired and star center Shaquille O'Neal had been traded away. Although Kobe Bryant had indicated he might opt out, he eventually stayed with the team. Over the next few months, most of the team was also traded away, leaving just Bryant and Devean George as the only two players left from the championship run.

On July 16, 2004, Fisher signed with the Golden State Warriors as a free agent. Ironically, he had told the Warriors he would accept their offer only hours before Bryant first announced that he would in fact stay with the Lakers, and then immediately called Fisher asking Fisher to return to the team. Fisher has not speculated about whether he would have made a different decision had Bryant's announcement and call come before Fisher committed to the Warriors.

Through his first two seasons in Golden State, Fisher's term there has been something of a disappointment. The team has continued to struggle mightily and languish near the bottom of the Western Conference standings. Fisher has stated that his primary reason for leaving the Lakers to come to the Warriors was the chance to run his own team as the starting point guard, but he has long since been replaced in that role and is back to coming off the bench.

On the brighter side, in the 2005-2006 season, he has been productive in his role on the team, averaging over 13 points a game, the highest season scoring average of his career.

Derek Fisher was acquired by the Utah Jazz on July 12, 2006 in a trade that sent Keith McLeod, Andre Owens, and Devin Brown to the Golden State Warriors.