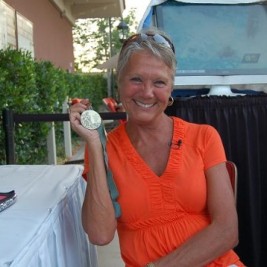 Businesses, Non-profit organizations, event planners and companies across the country have worked closely with our booking agents to hire Debbie Meyer for a speaking engagements, guest appearances, product endorsements and corporate events. Many of those same clients have continued to turn to our speakers bureau as we can easily align Debbie Meyer’s availability with their upcoming seminar, gala, annual conference, corporate function, and grand opening. Our close relationship with Debbie Meyer’s booking agent and management team further enables us to provide inquiring clients with Debbie Meyer’s speaking fee and appearance cost.

If your goal is to hire Debbie Meyer to be your next keynote speaker or to be the next brand ambassador our celebrity speakers bureau can assist. If Debbie Meyer’s booking fee is outside your companies budget or your unable to align with his appearance availability, our booking agents can provide you a list of talent that aligns with your event theme, budget and event date.

Deborah Elizabeth Meyer is an American former competition swimmer, a three-time Olympic champion, and a former world record-holder in four events. Meyer won the 200-, 400-, and 800-meter freestyle swimming races in the 1968 Summer Olympics in Mexico City. While she was still a 16-year-old student at Rio Americano High School in Sacramento, California, she became the first swimmer to win three individual gold medals in one Olympics. Meyer remains the only woman Olympian to win three individual freestyle swimming gold medals in one Olympics. No female swimmer has ever done this in any other combination of distances. Meyer set world records in 200-meter, 400-meter, and 800-meter freestyle swimming events at the U.S. Olympics trials. Her winning times at the Olympic Games were 2:10.5 for the 200-meter, 4:31.8 for the 400-meter, and 9:24.0 for the 800-meter distances, all of them new or first-time Olympic records. In 1968, the women's freestyle races at 200-meter and 800-meter distances were added to the Summer Olympics for the first time. Before this, the longest race for women was the 400-meter freestyle, despite the fact that the male competitors had had the 1,500-meter freestyle race (the metric mile) for decades, dating back to 1896. While overcoming her problems with asthma, Meyer broke 15 world records in swimming during her career. Meyer broke 24 American records and won 19 Amateur Athletic Union (AAU) national championships. In 1968, she won the James E. Sullivan Award. In 1969, she was named Associated Press Athlete of the Year. She was named Swimming World's World Swimmer of the Year in 1967, 1968 and 1969. In 1972, Meyer retired from competitive swimming. She was inducted into the International Swimming Hall of Fame in 1977, and the United States Olympic Hall of Fame in 1986.