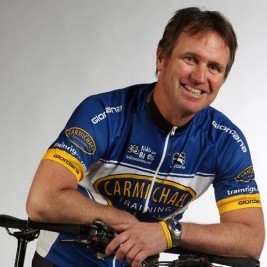 If your goal is to hire Chris Carmichael to be your next keynote speaker or to be the next brand ambassador our celebrity speakers bureau can assist. If Chris Carmichael’s booking fee is outside your companies budget or your unable to align with his appearance availability, our booking agents can provide you a list of talent that aligns with your event theme, budget and event date.

Former Olympian Chris Carmichael is the founder and chairman of Carmichael Training Systems, Inc. Carmichael formed CTS in 1999 after spending more than two decades in the sport of cycling. CTS provides clients the finest personal coaching available by creating and managing training programs, camps and certifying performance related training products. Chris Carmichael's unique "Train Right" TM methods have been featured on NBC "Nightly News," the Discovery Channel, CBS's "60 Minutes" and ABC's "World News Tonight." Chris Carmichael is coach of cancer survivor and 1999, 2000, 2001, and 2002 Tour de France Champion Lance Armstrong, whom he has coached since 1990. He is widely regarded as the person most responsible for making Armstrong the cyclist he is today by implementing an innovative training program designed to work with Armstrong's body post-cancer. Chris Charmichael is also the coach of three-time Olympian George Hincapie, former World Champion Dede Demet-Barry, 2000 Olympian Dylan Casey and 2000 ParaOlympian Ron Williams. Carmichael's reputation as more than a top cycling coach is becoming evident as he being sought after to work with and coach many world class athletes outside of cycling. In January 2001, Carmichael agreed to serve as fitness coach of Indy Car Racing's Eliseo Salazar, who finished third in the 2000 Indianapolis 500. In March 2002, Chris Carmichael began working with Montreal Canadiens team captain, Saku Koivu, following his treatments for non-Hodgkin's lymphoma and being declared cancer free. In 1999, Carmichael was awarded the prestigious United States Olympic Committee's Coach of the Year Award as well as the Cycling Coach of the Year Award. In 1997, Chris Carmichael consulted with various companies within the cycling and fitness industries. Also in 1997, he joined the Union Cycliste Internationale, the international governing body for cycling headquartered in Lausanne, Switzerland, as Olympic Solidarity Coaching Instructor. He is an educator of coaches in economically disadvantaged countries. From 1990 to 1997, Chris Carmichael worked for USA Cycling in Colorado Springs, Colo. as National Coaching Director. He served as the road cycling coach for the 1992 Olympics and as head coach during the 1996 Olympic Games in Atlanta, GA where US Cyclists took home three medals. He also coached several World Championships teams. Athletes under his direction have won 33 Olympic, World Championships and Pan American Games medals. In 1996, Chris Carmichael directed "Project '96," USA Cycling's state-of-the-art technology project. During his tenure at USA Cycling, he created the coaching education program, a certification program designed to educate and develop cycling coaches. A member of the 1984 U.S. Olympic Cycling Team, Chris Carmichael was part of the first American team to ride in the Tour de France in 1986. He was a member of the U.S. national Cycling Team from 1978-1984. Carmichael also serves on the Coaches Advisory Committee for the Positive Coaching Alliance as well as serving on the USOC/USA Cycling Elite Athlete Task Force.