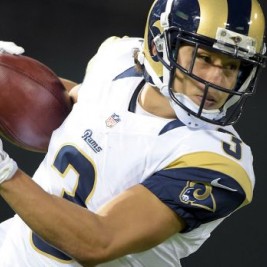 If your goal is to hire Daniel Rodriguez to be your next keynote speaker or to be the next brand ambassador our celebrity speakers bureau can assist. If Daniel Rodriguez’s booking fee is outside your companies budget or your unable to align with his appearance availability, our booking agents can provide you a list of talent that aligns with your event theme, budget and event date.

NFL hopefully and Purple Heart recipient, Daniel Rodriguez has had an incredible journey. After surviving the bloodiest clash of the war in Afghanistan, he left the military and walked on the Clemson football special teams in order to fulfill a promise to a friend who died on the battlefield.

Rodriguez’s father passed away four days after his high school graduation. He sought out the military and spent 15 months in Iraq before heading to Afghanistan, where he found himself in the bloodiest battle of the war. As more than 300 Tailban assaulted his combat outpost, it was partially overrun and nearly destroyed. During the 18-hour, point-blank battle, eight U.S. soldiers were killed, including Rodriguez’s close friend, Pfc. Kevin Thompson. The two had bonded over making plans for what they would do after they got out of the military. Six months later, Rodriguez returned home, only to battle the psychological effects of war. After earning a Purple Heart and Bronze Star for his bravery, suicidal thoughts and heavy drinking became the new normal. Spurred by the desire to make his friend’s death meaningful, Rodriguez decided to make a change. He enrolled in community college, raised his grades, and vowed to make good on the promise he had made to Thompson – to get his education and play college football.

Rodriguez committed to getting back in shape. He quit drinking and worked out more than six hours a day. Despite the training, he battled other stereotypes – he was older now than the typical college freshman and weighed less than 200 pounds. But Rodriguez didn’t give up. With an utter devotion to accomplishing his goal, he found a friend with filmmaking experience and the two shot a unique recruitment video.

Never asking for a handout, only a chance, he reminds audiences what it means to take control and work to succeed with determination. Rodriguez shares the story of how he came back from the edge of war in order to honor his friend’s life and create a new one for himself. His accomplishments resonate with anyone who has ever fought for what they wanted.

In 2012, Rodriguez was honored with the Discover Orange Bowl Courage Award for his display of courage on and off the field. In 2014, he received the Armed Forces Merit Award, presented by the Football Writers Association of America and honoring an individual with a military background that has made an impact in college football. He was also awarded the American Hero Award by the Walter Camp foundation. During his senior season with the Tigers, he published Rise: A Soldier, A Dream and a Promise Kept, the firsthand account of his journey from Kamdesh to Clemson.

In Spring 2015, Rodriguez was signed by the St. Louis Rams and currently resides in South Carolina.