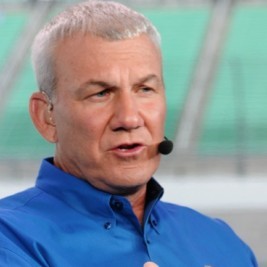 Businesses, Non-profit organizations, event planners and companies across the country have worked closely with our booking agents to hire Dale Jarrett for a speaking engagements, guest appearances, product endorsements and corporate events. Many of those same clients have continued to turn to our speakers bureau as we can easily align Dale Jarrett’s availability with their upcoming seminar, gala, annual conference, corporate function, and grand opening. Our close relationship with Dale Jarrett’s booking agent and management team further enables us to provide inquiring clients with Dale Jarrett’s speaking fee and appearance cost.

If your goal is to hire Dale Jarrett to be your next keynote speaker or to be the next brand ambassador our celebrity speakers bureau can assist. If Dale Jarrett’s booking fee is outside your companies budget or your unable to align with his appearance availability, our booking agents can provide you a list of talent that aligns with your event theme, budget and event date.

Dale Jarrett is a former American race car driver and current sports commentator known for winning the Daytona 500 three times (in 1993, 1996, and 2000) and winning the NASCAR Winston Cup Series championship in 1999. He is the son of 2-time Grand National Champion Ned Jarrett, younger brother of Glenn Jarrett, father of former driver Jason Jarrett, and cousin of Todd Jarrett. In 2007, Jarrett joined the ESPN/ABC broadcasting team as an announcer in select Nationwide Series races. In 2008, after retiring from driving following the 2008 Food City 500, he joined ESPN permanently as the lead racing analyst replacing Rusty Wallace. In 2015, Jarrett will be part of the NBC Sports Broadcasting Crew for NASCAR events. He was inducted in the 2014 class of the NASCAR Hall of Fame.