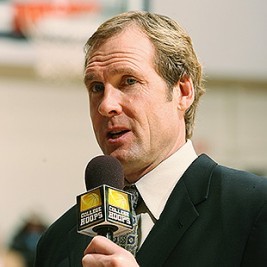 Businesses, Non-profit organizations, event planners and companies across the country have worked closely with our booking agents to hire Craig Ehlo for a speaking engagements, guest appearances, product endorsements and corporate events. Many of those same clients have continued to turn to our speakers bureau as we can easily align Craig Ehlo’s availability with their upcoming seminar, gala, annual conference, corporate function, and grand opening. Our close relationship with Craig Ehlo’s booking agent and management team further enables us to provide inquiring clients with Craig Ehlo’s speaking fee and appearance cost.

If your goal is to hire Craig Ehlo to be your next keynote speaker or to be the next brand ambassador our celebrity speakers bureau can assist. If Craig Ehlo’s booking fee is outside your companies budget or your unable to align with his appearance availability, our booking agents can provide you a list of talent that aligns with your event theme, budget and event date.

A 6 ft 8 in guard/forward from Odessa Junior College and Washington State University, Ehlo was selected in the third round of the 1983 NBA draft by the Houston Rockets, and went with the Rockets to the 1986 NBA Finals in a losing cause to the Boston Celtics. He played 14 NBA seasons with a total of four teams, amassing respectable career totals of 7,492 points, 2,456 assists and 3,139 rebounds.

He spent the prime of his career with the Cleveland Cavaliers, with whom he tallied 5,130 points, 1,803 assists, and 2,267 rebounds in seven seasons (1986–1993). Ehlo is perhaps best remembered for being the victim of one of Chicago Bulls star Michael Jordan's greatest performances. On May 7, 1989, Ehlo, then a Cavalier, was defending Jordan when he made "The Shot", the series-clinching jumper in the first round of the NBA Playoffs in front of a Cleveland home crowd, then considered an upset as Cleveland was the 3rd seed in the east and Chicago was the 6th.

Ehlo spent the second half of his career with the Atlanta Hawks as Steve Smith's backup. Before the 1996–97 season, he signed with the Seattle SuperSonics, and was used sparingly.