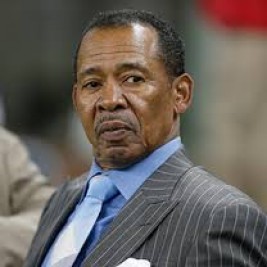 If your goal is to hire Charlie Sanders to be your next keynote speaker or to be the next brand ambassador our celebrity speakers bureau can assist. If Charlie Sanders’s booking fee is outside your companies budget or your unable to align with his appearance availability, our booking agents can provide you a list of talent that aligns with your event theme, budget and event date.

Charlie Sanders was born August 25, 1946 and is a former American football player who played tight end for the Detroit Lions from 1968-77.

Sanders attended James B. Dudley High School in Greensboro and the University of Minnesota. The Lions chose him in the third round of the 1968 NFL Draft, and he became their starting tight end for the next ten seasons. He had 336 career receptions and was known as a superior blocker as well as a receiver. He was chosen for the Pro Bowl seven times (1968-71 and 1974-76), and was named to the NFL 1970s All-Decade Team as selected by voters of the Pro Football Hall of Fame. Sanders is also a member of the North Carolina Sports Hall of Fame. On February 3, 2007, Sanders was voted into the Pro Football Hall of Fame.

After his retirement as a player, Sanders worked with the Lions as an assistant in charge of wide receivers (1989-96) and is currently their assistant director of pro personnel. In 2005, he co-authored "Charlie Sanders' Tales from the Detroit Lions," a book of anecdotes about the team and its players. Sanders and his wife, Georgianna, have nine children and live in Rochester Hills, Michigan. One of his daughters, Mary Jo is a pro boxer, and two of his sons played college football one at Ohio State University, and had a brief NFL career with the Detroit Lions, and one at Saginaw Valley State University.