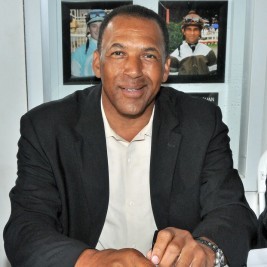 Businesses, Non-profit organizations, event planners and companies across the country have worked closely with our booking agents to hire Isaac Curtis for a speaking engagements, guest appearances, product endorsements and corporate events. Many of those same clients have continued to turn to our speakers bureau as we can easily align Isaac Curtis’s availability with their upcoming seminar, gala, annual conference, corporate function, and grand opening. Our close relationship with Isaac Curtis’s booking agent and management team further enables us to provide inquiring clients with Isaac Curtis’s speaking fee and appearance cost.

If your goal is to hire Isaac Curtis to be your next keynote speaker or to be the next brand ambassador our celebrity speakers bureau can assist. If Isaac Curtis’s booking fee is outside your companies budget or your unable to align with his appearance availability, our booking agents can provide you a list of talent that aligns with your event theme, budget and event date.

Curtis received a football scholarship to the University of California, Berkeley. For three years, he excelled as a member of Cal's track team, and he was a running back and kick returner for the football team, setting several rushing records.

After he finished his junior season, Curtis transferred to San Diego State University because of the controversy surrounding the probation of Cal's football team. He excelled as a slot wide receiver during his senior season under the famed Aztecs coach Don Coryell, who moved him from running back to receiver. In his senior year, Curtis caught 44 passes for 832 yards and seven touchdowns.

Isaac Curtis made the starting lineup as a rookie and had a superb season, recording 45 receptions for 843 yards, an average of 18.7 yards per catch, and nine touchdowns. . In his second season, he caught 30 passes for 630 yards (a 21.1 yard-per-catch average) and a career-best 10 touchdowns.

His most productive season was his third in 1975, when he caught 44 passes for 934 yards for a league-leading and career-best 21.2 yard-per-catch average, along with scoring seven touchdowns. He had another big year in 1976, with 41 receptions for 766 yards and six touchdowns, including a career-long 85-yard touchdown reception. In 1977 he was limited by injury to 20 catches in eight games, but bounced back in 1978 with a career-best 47 receptions along with 737 yards and three touchdowns.

He continued to play a major part in the Bengals' passing games until his 11th and final NFL season, 1984, when he had 12 receptions. Curtis was a Pro Bowl selection four times (1973–1976) and was selected 2nd Team All-Pro for three consecutive seasons (1974–1976). Curtis helped lead the Bengals to a Super Bowl appearance in the 1981 season and had a solid performance in Super Bowl XVI, catching three passes for 42 yards. Years after his retirement, his quarterback Ken Anderson said that Isaac Curtis was "The Jerry Rice before Jerry Rice".

In his 12 NFL seasons, Curtis totaled 416 receptions for 7,101 yards and 53 touchdowns, while also gaining 76 rushing yards on 25 carries. His 17.1 yards per catch average is a Bengals record and his 7,101 receiving yards was a franchise record until broken by Chad Johnson on September 16, 2007. His 53 touchdown receptions were a Bengals record until surpassed by Carl Pickens in the late 1990s.