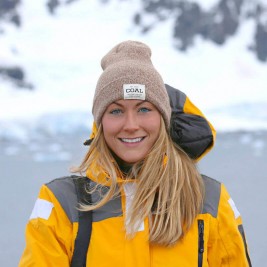 If your goal is to hire Cassie De Pecol to be your next keynote speaker or to be the next brand ambassador our celebrity speakers bureau can assist. If Cassie De Pecol’s booking fee is outside your companies budget or your unable to align with his appearance availability, our booking agents can provide you a list of talent that aligns with your event theme, budget and event date.

Cassie is from a middle-class family and was raised in a rural, small town in Connecticut. She was homeschooled until the age of 12 along with her brother. Her home schooling included “out of the box” courses such as nature studies and multi-cultural experiences. Cassie then attended public schools and graduated from high school in 2007.

Cassie’s college experience started off at Long Island Universities ‘Global College’, studying under the major of ‘Global Studies’ in Costa Rica and Nicaragua her freshman year. Here, she lived within local communities and studied rain forests, economic/political systems and global studies. Wanting to pursue more environmental studies, Cassie transferred to Green Mountain College in Vermont. She then transferred to Santa Barbara City College in California taking courses such as Meteorology, Oceanography and Geology, while paying her way by working in the hotel industry, lifeguarding and babysitting.

In the summer of 2010, Cassie saved up $2,000 and decided to “see the world”. She left in August of 2010 with her brother, Jason, to Belgium where they then spent the next month traveling to the walls of Berlin, the gardens of Munich and the mountains of Switzerland, before parting ways. Her brother went on to travel to France before returning home, while Cassie’s travels took her to Turkey, where she’d spend the next two months working across Olympus, Kas, Fethiye, and traveling everywhere in between. She was able to travel for two years by couch surfing and working at eco B&B’s and resorts which gave her an enormous understanding of worldwide culture and eco-conscious hospitality venues and finally landed back in California. During these years Cassie had traveled to roughly 25 countries and made the $2,000 last through budget travel and working along the way.

In 2012, she received an internship with Solimar International and USAID and lived in the Bolivian Amazon (Rurrenabaque), advising tour companies on their marketing and sustainability initiatives. Shortly thereafter she began an internship as a ‘Sustainability Advisor’ at an eco-hotel within the Achuar communities of the Ecuadorian Amazon. The experience of living with indigenous people deep in the Amazon would be a life changing event that opened her eyes to the extremes of human culture.

After the Amazon experience Cassie took a 9-5 job in Washington DC to experience “a normal life” for a while. She found the corporate world to be extremely unfulfilling and moved back to California to reflect on her passion and figure out what her career might be.

With major travel experience under her belt and an intense passion for travel, ecology, women’s achievement while promoting peace, Cassie decided to make “an impact on the world” and began planning the “Expedition 196.” In July of 2015, after a year and a half of planning, saving money, obtaining sponsors and endorsements, she launched her Expedition on stage LIVE at a major public event called The World Domination Summit, in Portland, Oregon.

In 2017, Cassie, at 27 years old, has finished her journey, “Expedition 196” in Guinness World Record time. As of February 2017, Cassie has traveled to 196 countries alone. Cassie is now working on the editing and distribution of the educational documentary she’s been filming, a book, TV shows, speaking engagements, branding agreements and has developed a seminar to help other fulfill their dreams and passions in travel.