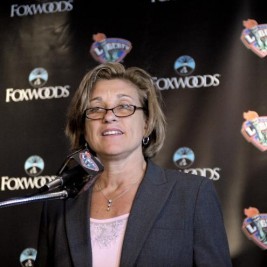 If your goal is to hire Carol Blazejowski to be your next keynote speaker or to be the next brand ambassador our celebrity speakers bureau can assist. If Carol Blazejowski’s booking fee is outside your companies budget or your unable to align with his appearance availability, our booking agents can provide you a list of talent that aligns with your event theme, budget and event date.

Carol Blazejowski was born September 29, 1956, in Elizabeth, New Jersey.  Nicknamed "The Blaze", she was a women's collegiate and professional basketball player. She is also formely the President and General Manager of the New York Liberty of the Women's National Basketball Association.

Using a jump shot patterned after what she saw in televised professional games, Blazejowski became one of the greatest scorers in the history of women's basketball, although she didn't begin serious competition until her senior year at Cranford High School in Cranford, New Jersey.

Only an alternate on the 1976 Olympic team, she led the 1977 World University Games team in scoring and had 38 points in a losing effort against the Soviet Union.

After finishing her college career she played two seasons of AAU basketball with the Allentown, Pennsylvania, Crestettes. The leading scorer on the national team that won the 1979 world championship, she was chosen for the 1980 U.S. Olympic team, but her hopes for a gold medal were crushed after the U.S. boycott of the 1980 Summer Olympics.

In 1980, Blazejowski became the highest-paid player in the Women's Pro Basketball League, signing a three-year contract for a reported $150,000 with the New Jersey Gems. However, the league folded after her first season, effectively ending her playing career.