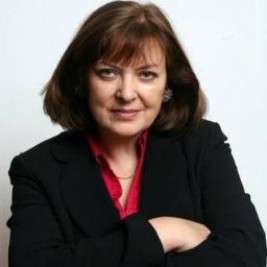 If your goal is to hire Bridget Kendall to be your next keynote speaker or to be the next brand ambassador our celebrity speakers bureau can assist. If Bridget Kendall’s booking fee is outside your companies budget or your unable to align with his appearance availability, our booking agents can provide you a list of talent that aligns with your event theme, budget and event date.

Bridget joined the BBC in 1983 as a radio production trainee for BBC World Service.

The following year she spent six months in television as a producer and presenter with BBC Two's Newsnight programme.

Returning to BBC World Service she worked as a producer and then editor and presenter on current affairs programmes 24 Hours, File On 4 and Newshour before moving to Moscow in 1989.

She has a particular interest in Russia and its relations with the West and spent a decade following political developments.

She was in Moscow to witness the power struggles in the Soviet Communist party as Mikhail Gorbachev tried to introduce reform, reported on the break-up of the Soviet Union and the subsequent internal conflicts in Chechnya, Georgia and Tadjikistan.

She sent eyewitness reports of the dramatic coup in August 1991 and later covered Boris Yeltsin's rise to power.

During the Nato campaign against Yugoslavia and the American led campaign in Afghanistan, she followed diplomatic and military developments on a daily basis for BBC News.

Bridget has interviewed several world leaders including President Putin live in Russia from the Kremlin as part of a worldwide internet webcast in March 2001.

Later that year she interviewed King Abdullah of Jordan for a tri-media event for the BBC and hosted a similar event in Moscow with former soviet president Mikhail Gorbachev in 2002.

Bridget was the first woman to win the coveted James Cameron Award for distinguished journalism in 1992 for her reports on events in the former Soviet Union.