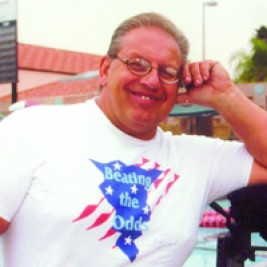 Businesses, Non-profit organizations, event planners and companies across the country have worked closely with our booking agents to hire Bob Wieland for a speaking engagements, guest appearances, product endorsements and corporate events. Many of those same clients have continued to turn to our speakers bureau as we can easily align Bob Wieland’s availability with their upcoming seminar, gala, annual conference, corporate function, and grand opening. Our close relationship with Bob Wieland’s booking agent and management team further enables us to provide inquiring clients with Bob Wieland’s speaking fee and appearance cost.

If your goal is to hire Bob Wieland to be your next keynote speaker or to be the next brand ambassador our celebrity speakers bureau can assist. If Bob Wieland’s booking fee is outside your companies budget or your unable to align with his appearance availability, our booking agents can provide you a list of talent that aligns with your event theme, budget and event date.

While studying at the University of Wisconsin LaCrosse, Bob Wieland began negotiating a contract to pitch for the Philadelphia Phillies. In 1969, however, Wieland's future with the Phillies was interrupted when he was summoned to Vietnam. In Vietnam, Wieland stepped on an 82mm mortar round while attempting to aid one of his fellow soldiers that was wounded. He was pronounced DOA (dead on arrival) at the hospital but somehow pulled through.

Wieland has both biked and walked across America...with no legs. Through seemingly insurmountable adversity, Bob has persevered. From his miraculous recovery in the hospital, to his three-year, eight-month and six-day walk across America on his hands, Bob has proved his message that "Through faith in God, determination, and dedication, a person can achieve anything."

Among his many accomplishments, Wieland is the only double amputee to coach in the National Football League; he shattered the world record for the bench press in his weight division four times, defeating fully able-bodied men; and finally, Weiland completed the grueling Iron Man Triathlon (2.4-mile swim, 112-mile bike ride, and 26-mile marathon) on his arms. Weiland, simply put, lives the messages of his presentations.

His programs include: One Step At A Time, Commando Warriors Are the Real World!, How To Be Up When You're Down, Beating The Odds and Strive For Success.