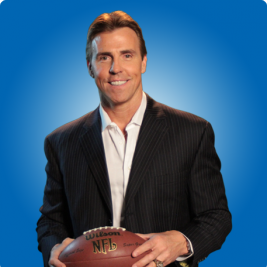 If your goal is to hire Bill Romanowski to be your next keynote speaker or to be the next brand ambassador our celebrity speakers bureau can assist. If Bill Romanowski’s booking fee is outside your companies budget or your unable to align with his appearance availability, our booking agents can provide you a list of talent that aligns with your event theme, budget and event date.

Romanowski played 243 consecutive games during the 1988-2003 seasons, an NFL record that stood until Chris Gardocki broke it during the 2006 season, finishing his career with 265, (256 reg. season and 9 playoff games). He won 4 Super Bowl Championships, and is the only linebacker to start 5 Super Bowls (Super Bowl XXIII, Super Bowl XXIV, Super Bowl XXXII, Super Bowl XXXIII and Super Bowl XXXVII). During his 16-year career, Romanowski compiled 1,105 tackles, 39.5 sacks, 18 forced fumbles, and 18 interceptions, which he returned for a net total of 98 yards and 1 career touchdown. Romanowski was a Pro Bowl selection twice, in 1996 and 1998, both during his tenure with the Denver Broncos.