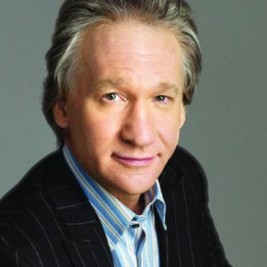 Businesses, Non-profit organizations, event planners and companies across the country have worked closely with our booking agents to hire Bill Maher for a speaking engagements, guest appearances, product endorsements and corporate events. Many of those same clients have continued to turn to our speakers bureau as we can easily align Bill Maher’s availability with their upcoming seminar, gala, annual conference, corporate function, and grand opening. Our close relationship with Bill Maher’s booking agent and management team further enables us to provide inquiring clients with Bill Maher’s speaking fee and appearance cost.

If your goal is to hire Bill Maher to be your next keynote speaker or to be the next brand ambassador our celebrity speakers bureau can assist. If Bill Maher’s booking fee is outside your companies budget or your unable to align with his appearance availability, our booking agents can provide you a list of talent that aligns with your event theme, budget and event date.

Bill Maher brought together some of the most interesting politicians, entertainers, and journalists who then participated in controversial, topical, and comical discussions. Winner of four CableACE Awards, Bill and his program grew in popularity, and in 1997 captured the ABC Nightline time slot. An innovative contender of provocative late night television, Politically Incorrect survived for five years on ABC and concluded its final run in July 2002. Bill Maher has since participated in comedy tours throughout the United States, and recently received a Tony nomination for his one-man Broadway show, Victory Begins at Home.

Inspired by the success of Politically Incorrect, Bill Maher assembled some of the most memorable highlights from the show in his book Does Anybody Have a Problem With That? Politically Incorrect's Greatest Hits. In the book, Bill delivers his tongue-in-cheek commentaries on such modest proposals as putting warning labels on the Bible, why there should be drunk driving lanes, and his regular "Get Over Yourself Award," given to such notables as Newt Gingrich, Santa Claus, and the O.J. Simpson defense team. Bill Maher also offers a collection of some of the funniest and most insightful thoughts from the panelists on Politically Incorrect, including Ben Affleck, Marilyn Manson, Ann Richards, Pamela Anderson, Oliver Stone, Ron Howard, Arianna Huffington, and Janeane Garofalo.

Bill Maher's credits include five HBO specials, including Bill Maher: Be More Cynical. He has appeared numerous times on Late Night with David Letterman and The Tonight Show with Jay Leno, where he also served as guest correspondent. In 2003, Bill Maher launched a new show, Real Time with Bill Maher, on the HBO network.

Bill Maher's latest book, When You Ride ALONE You Ride With Bin Laden, was released in November of 2003. The book is a useful and entertaining guide for the many Americans who want to help with the war effort, but are at a loss as to how. A combination of 33 new posters, as well as several classics from our government's archives, and text by Bill Maher, help Americans make the connections between what we do and how it can help our troops and ourselves. In conjunction with the book's release, Bill Maher went on a nationwide stand-up tour and drew standing ovations for his comedy routine, which utilized the posters from the book to illustrate his commentary.

An English major graduate from Cornell University, Bill Maher began his career honing his act during the '80s on the New York comic club scene. He reflects upon this time in his book, True Story, a novelization of his comic club life and perhaps the funniest and most revealing depiction of the comic's life to date.