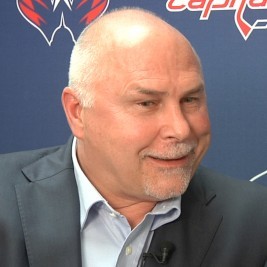 Businesses, Non-profit organizations, event planners and companies across the country have worked closely with our booking agents to hire Barry Trotz for a speaking engagements, guest appearances, product endorsements and corporate events. Many of those same clients have continued to turn to our speakers bureau as we can easily align Barry Trotz’s availability with their upcoming seminar, gala, annual conference, corporate function, and grand opening. Our close relationship with Barry Trotz’s booking agent and management team further enables us to provide inquiring clients with Barry Trotz’s speaking fee and appearance cost.

If your goal is to hire Barry Trotz to be your next keynote speaker or to be the next brand ambassador our celebrity speakers bureau can assist. If Barry Trotz’s booking fee is outside your companies budget or your unable to align with his appearance availability, our booking agents can provide you a list of talent that aligns with your event theme, budget and event date.

Barry Trotz was born July 15, 1962 in Dauphin, Manitoba and is the head coach of National Hockey League's Washington Capitals. He was previously the coach of the American Hockey League's Baltimore Skipjacks and Portland Pirates, with whom he won an AHL championship in 1994. That same year, he won the Louis A.R. Pieri Memorial Award, which is awarded to the outstanding coach in the AHL as voted upon by the AHL Broadcasters and Writers. He became the coach of Predators in 1997, when the team was created. As of 2009, Trotz remains the only coach of the team, having led the Preds to four consecutive playoff appearances. He holds the record for most games coached by the first coach of an NHL franchise. The record for an expansion franchise was previously held by Terry Crisp while with the Tampa Bay Lightning. Coincidentally, Crisp now works as a radio and TV broadcaster for the Nashville Predators. Prior to becoming a coach, Trotz played for the WHL's Regina Pats from 1979 to 1982. Barry played his final year of junior hockey in his home town of Dauphin, Manitoba, where the Kings won the MJHL title as well as the Anavet Cup.