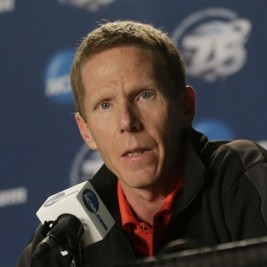 Businesses, Non-profit organizations, event planners and companies across the country have worked closely with our booking agents to hire Mark Few for a speaking engagements, guest appearances, product endorsements and corporate events. Many of those same clients have continued to turn to our speakers bureau as we can easily align Mark Few’s availability with their upcoming seminar, gala, annual conference, corporate function, and grand opening. Our close relationship with Mark Few’s booking agent and management team further enables us to provide inquiring clients with Mark Few’s speaking fee and appearance cost.

If your goal is to hire Mark Few to be your next keynote speaker or to be the next brand ambassador our celebrity speakers bureau can assist. If Mark Few’s booking fee is outside your companies budget or your unable to align with his appearance availability, our booking agents can provide you a list of talent that aligns with your event theme, budget and event date.

Mark Few was born December 27, 1962 and is an American college basketball coach, currently the head coach at Gonzaga University. He has served on Gonzaga's coaching staff since 1989, and has been a constant on the sidelines throughout a period that has seen the Bulldogs rise from mid-major obscurity to regular participants in the NCAA tournament.

With Few as head coach, the Gonzaga program produced its first two first-team All-Americans in Dan Dickau and Morrison, plus future NBA players in Blake Stepp, Austin Daye and Ronny Turiaf and Robert Sacre and Jeremy Pargo. In 2005, Few signed a contract extension intended to keep him at Gonzaga through 2015.

On March 21, 2009; Few notched his 254th win as Gonzaga's head coach with a second-round victory in the NCAA Tournament, passing his former boss Fitzgerald as the winningest coach in school history.

During the 2012-13 season, Few led the Bulldogs to the #2 ranking in both major polls, the highest national ranking in school history. However, that record fell a week later when the Bulldogs surged to #1 in both polls for the first time ever--the first time that a WCC school had ascended to the top spot since San Francisco in the 1970s.