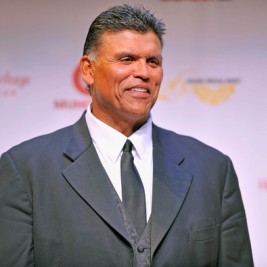 Businesses, Non-profit organizations, event planners and companies across the country have worked closely with our booking agents to hire Anthony Munoz for a speaking engagements, guest appearances, product endorsements and corporate events. Many of those same clients have continued to turn to our speakers bureau as we can easily align Anthony Munoz’s availability with their upcoming seminar, gala, annual conference, corporate function, and grand opening. Our close relationship with Anthony Munoz’s booking agent and management team further enables us to provide inquiring clients with Anthony Munoz’s speaking fee and appearance cost.

If your goal is to hire Anthony Munoz to be your next keynote speaker or to be the next brand ambassador our celebrity speakers bureau can assist. If Anthony Munoz’s booking fee is outside your companies budget or your unable to align with his appearance availability, our booking agents can provide you a list of talent that aligns with your event theme, budget and event date.

An eleven-time NFL Pro Bowl selection, Muñoz is the only Pro Football Hall of Fame inductee in Cincinnati Bengals history. Since retiring, Anthony and his family have remained in Cincinnati, where Muñoz has served as one of the community’s most accessible and involved advocates.

A California native, Anthony excelled in football, basketball and baseball at Chaffey High School. He received a football scholarship to the University of Southern California, where he led the Trojans to the 1978 National Championship. Throughout his career at USC, he earned All-American and All-Conference awards.

Despite his skill and brilliant performance, Muñoz battled multiple injuries, including three knee surgeries that almost ended his career. His faith, family and sheer will helped him overcome the setbacks. His diligent workout routine and commitment to fitness paved the way for a remarkable professional career in which he missed just three games in his first 11 years in the NFL.

Anthony was selected by the Bengals as the third overall pick in the 1980 NFL Draft, and instantly became one of the league’s premiere lineman. He led the team to two Super Bowls, three AFC Central Division titles and two AFC Championships (1981 and 1988).

Anthony has also been recognized for his tireless community involvement. He was the recipient of the Athletes in Action Bart Starr Award for Leadership in 1990, and was named the Cincinnati Bengals Man of the Year Award for five consecutive years. In 1991, he was honored as the NFL Man of the Year.

Following his retirement, Muñoz received the ultimate honor for an athlete. He was elected into the Pro Football Hall of Fame in his first attempt on the ballot. In August of 1998, Muñoz was enshrined into the Hall of Fame in Canton, Ohio. He selected his son, Michael, to introduce him at the induction ceremonies.

Anthony has been involved in several ventures since his playing days ended. He served as a television analyst for ESPN and Fox, and continues to cover the Cincinnati Bengals on WKRC-TV and WLW Radio. Anthony also serves on the NFL Youth Board.

Most recently, Anthony established the Anthony Muñoz Foundation, a non-profit organization that empowers children to reach their highest potential. Since April 2002, the foundation has impacted thousands of children and raised more than $1,000,000 for foundation programs and select charities.

A devoted husband and father, Muñoz and his wife, Dede, are the proud parents of Michael, 22, and Michelle, 20. Following in his father’s footsteps, Michael is a star offensive lineman for the University of Tennessee, while Michelle is a basketball star at the Ohio State University.