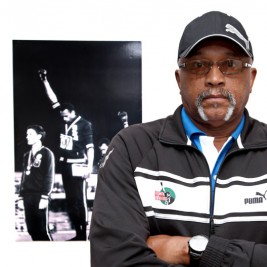 Businesses, Non-profit organizations, event planners and companies across the country have worked closely with our booking agents to hire Tommie Smith for a speaking engagements, guest appearances, product endorsements and corporate events. Many of those same clients have continued to turn to our speakers bureau as we can easily align Tommie Smith’s availability with their upcoming seminar, gala, annual conference, corporate function, and grand opening. Our close relationship with Tommie Smith’s booking agent and management team further enables us to provide inquiring clients with Tommie Smith’s speaking fee and appearance cost.

If your goal is to hire Tommie Smith to be your next keynote speaker or to be the next brand ambassador our celebrity speakers bureau can assist. If Tommie Smith’s booking fee is outside your companies budget or your unable to align with his appearance availability, our booking agents can provide you a list of talent that aligns with your event theme, budget and event date.

By the time he was in the fourth grade, Tommie Smith became the only male in the history of track & field to hold eleven world records simultaneously. By the time he graduated from high school, he had been voted "Most Valuable Athlete" three years in a row for basketball, football, and track & field. His college career was also highlighted with numerous achievements. He began breaking world records in track as a sophomore and did not stop until he had tied or broken thirteen.

With a time of 19.83 seconds, Tommie was the 200-meter champion in the 19th Olympiad in Mexico City, which was a world record until 1979 and an Olympic record until 1984. He was made a member of the National Track & Field Hall of Fame in 1978 and served on the coaching staff of the World Indoor Championship Team in 1995 in Barcelona Spain. Tommie was inducted into the California Black Sports Hall of Fame in 1996, and in 1999 he received the Sportsman of the Millennium Award. That same year, Smith was inducted into the Bay Area Hall of Fame, into the Lemoore Union High School Hall of Fame and into the San Jose State University Sports Hall of Fame.

After the games of the 19th Olympiad, Tommie played professional football for 3 years with the Cincinnati Bengals. He later became an Assistant Professor of Physical Education at Oberlin College in Northeast Ohio where he taught Sports Sociology and numerous physical education courses, counseled many students and athletes, coached Track & Field, Football and Basketball, and served as the Athletic Director.

Tommie has appeared in TV shows including the ESPN special "Season of Change: The African American Athlete," and also a documentary by TNN called "15 Minutes of Fame." He has been featured in publications such as Sports Illustrated, Sports, Newsweek, Cleveland, Score, Ebony, and Track & Field News. He competed and continues to travel throughout various European and Asian nations, conducting seminars, clinics and delivering speeches in those locations, as well as on domestic college campuses.

Tommie is currently a faculty member at Santa Monica College in California where he has been a part of college committees such as the Academic Senate and the College Curriculum Committees, as well as teaching several Sociology, Health and Physical Education classes. He is also the Head Men's Cross-Country and Track & Field Coach.