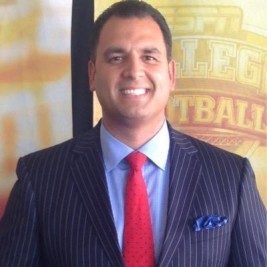 Businesses, Non-profit organizations, event planners and companies across the country have worked closely with our booking agents to hire Anthony Becht for a speaking engagements, guest appearances, product endorsements and corporate events. Many of those same clients have continued to turn to our speakers bureau as we can easily align Anthony Becht’s availability with their upcoming seminar, gala, annual conference, corporate function, and grand opening. Our close relationship with Anthony Becht’s booking agent and management team further enables us to provide inquiring clients with Anthony Becht’s speaking fee and appearance cost.

If your goal is to hire Anthony Becht to be your next keynote speaker or to be the next brand ambassador our celebrity speakers bureau can assist. If Anthony Becht’s booking fee is outside your companies budget or your unable to align with his appearance availability, our booking agents can provide you a list of talent that aligns with your event theme, budget and event date.

Anthony Becht was born August 8, 1977 in Drexel Hill, Pennsylvania and is a tight end for the Arizona Cardinals of the National Football League. He was drafted by the New York Jets 27th overall in the 2000 NFL Draft. He played college football at West Virginia.

Becht has also played for the Tampa Bay Buccaneers and St. Louis Rams.

Becht was selected by the Jets with a traded draft pick from Tampa Bay. As a rookie in 2000 for the Jets, Becht played in 14 games, missing two due to an ankle sprain. He was a starter for 10 games and totaled 16 receptions for 144 yards and two touchdowns on the season. Becht ranked third among the rookie tight ends with receptions, behind Green Bay's Bubba Franks and Cleveland's Aaron Shea.

In 2001, Becht started all 16 games and recorded 36 receptions for 321 yards and five TDs. He tied former Jets' tight end Kyle Brady for the most receptions by an AFC tight end. His five scores were only beat by Colts' Marcus Pollard and Chiefs' Tony Gonzalez. Becht recorded consecutive game-winning touchdown catches in weeks 13 and 14.

In 2002, Becht once again starter all 16 games and tallied 28 receptions, 243 yards, and a career-high tying five scores. Becht caught one pass for eight yards and served as a key blocker in the 41-0 win over the Colts in the AFC Wild Card playoff game and recorded three receptions for 14 yards in the AFC Divisional Playoff loss at Oakland.

In 2003, Becht set career-highs of 40 receptions for 356 yards and he included four TD catches while starting all sixteen games once again. Becht caught a career-best six passes, including a one-yard touchdown, and gained 32 yards at Miami in the season finale.

As his final season as a Jet in 2004, Becht had a career-low 13 receptions, for also lows of 100 yards and only 1 touchdown. He did manage to catch a touchdown pass in the Jets Wild Card win over the San Diego Chargers. In New York, Becht totaled 1,146 yards receiving with 17 touchdowns off of 133 receptions.

In his first year in Tampa Bay in 2005, Becht recorded 16 receptions, much like his rookie year, 112 yards but no touchdowns as his career began to slide downward. Becht competed with rookie Alex Smith for the tight end spot, who the Bucs picked up in the 2005 NFL Draft.

In 2006, Becht saw himself being replaced by the rookie, Smith. Still, Becht grabbed 18 receptions for 115 yards and a score, from mainly rookie Bruce Gradkowski.

In 2007, Becht's productivity decreased even more. He finished the season with only 5 receptions for 20 yards and 2 touchdowns.

On March 6, 2008 he signed with the St. Louis Rams. Becht joined fellow-former Mountaineers Marc Magro and Marc Bulger on the Rams squad. Becht played one season with the team before his release on March 12, 2009.

As of the end of the 2009-2010 season, Becht has played over 150 straight games in his career which currently ranks 3rd behind Brett Favre and Peyton Manning.