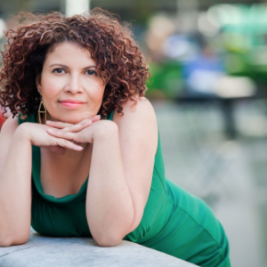 If your goal is to hire Anjanette Delgado to be your next keynote speaker or to be the next brand ambassador our celebrity speakers bureau can assist. If Anjanette Delgado’s booking fee is outside your companies budget or your unable to align with his appearance availability, our booking agents can provide you a list of talent that aligns with your event theme, budget and event date.

Anjanette Delgado is an award-winning novelist, speaker, and journalist who has written or produced for media outlets such as NBC, CNN, NPR, Univision, HBO and Vogue Magazine’s Latam and Mexico divisions, and for Telemundo, among others. She’s covered presidential coups, elections, the Olympics, both Iraq wars and the 9/11 terrorist attacks.

Early in her career, she became fascinated with heartbreak, the different ways in which it occurs, and the consequences it brings. Her human-interest television series “Madres en la Lejanía” won an Emmy award for its depiction of Latina mothers working as undocumented nannies in the United States, while living with the consequences of having left their own children behind in search of a better life.

Her original screenplay for HBO, “Good in Bed,” was a thesis on the life moments in which sex, love, identity, self, and society collide.

The Clairvoyant of Calle Ocho is Anjanette’s latest novel. Set in vibrant Little Havana, it tells the story of Mariela Esteves, a woman whose choice to renounce her true calling results in two failed marriages, a brush with murder, and a lot of heartbreak. It will be released in the Fall of 2014 by Kensington Books Publishing, and in Spanish in the U.S. and Mexico by Penguin Random House. Both novels have also been optioned recently for film and television.

Anjanette has an MFA in Creative Writing from Florida International University and was admitted as a contributor to the prestigious Bread Loaf Writing Conference in 2013 and in the upcoming 2014 session. She teaches writing at the Miami International Book Fair’s Florida Literacy Arts Center and lives in Miami with her husband Daniel and her mini dachshund Chloe. She is a native of Puerto Rico, has two daughters, and drinks a café con leche made with almond coconut milk every morning at precisely 7:45 a.m