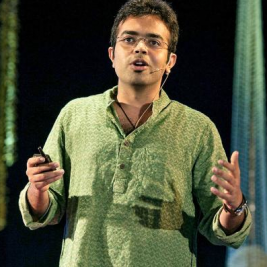 Businesses, Non-profit organizations, event planners and companies across the country have worked closely with our booking agents to hire Anirudh Sharma for a speaking engagements, guest appearances, product endorsements and corporate events. Many of those same clients have continued to turn to our speakers bureau as we can easily align Anirudh Sharma’s availability with their upcoming seminar, gala, annual conference, corporate function, and grand opening. Our close relationship with Anirudh Sharma’s booking agent and management team further enables us to provide inquiring clients with Anirudh Sharma’s speaking fee and appearance cost.

If your goal is to hire Anirudh Sharma to be your next keynote speaker or to be the next brand ambassador our celebrity speakers bureau can assist. If Anirudh Sharma’s booking fee is outside your companies budget or your unable to align with his appearance availability, our booking agents can provide you a list of talent that aligns with your event theme, budget and event date.

Anirudh Sharma always found conventional education boring. After finishing school, he set up a small animation studio on the pretext of preparing for the entrance exams to engineering colleges. Two years later, he even enrolled with an engineering college in Rajasthan, but found himself building award-winning large interactive displays instead of studying.

In 2009, Sharma dropped out of college and began to build interactive displays on a commercial scale, when he was invited by the Imagine Group at Hewlett Packard for an internship in Bengaluru. In 2010, he thought up Lechal, a shoe fitted with the vibrator of a mobile phone that would give visually impaired people a haptic sense of direction. The idea went viral. Sharma soon saw possibilities for the general population too, and he quit his internship to launch his shoe company called Ducere Technologies in Hyderabad with Krispian Lawrence, a friend from Bengaluru. It won him the MIT TR35 ‘Innovator of Year’ award in 2012. From a team of two, Lechal now has 100 employees.

Lechal’s success also got Sharma an offer to pursue a Master’s degree at MIT Media Lab in 2012. This gave him the opportunity to learn to build next generation augmented reality systems using futuristic technologies. After graduating in 2015, instead of opting for a job in San Francisco, he set up a research lab in India. “In India, there are so many problems around you. Either you crib about them or say let’s solve them, let’s do something about it. There’s a big opportunity here,” says Sharma.

Sharma’s initiative in India focuses on anti-disciplinary research, bringing the best of scientists, engineers, designers, artists on the same platform to innovate. Currently they are working on repurposing air pollution into industrial grade printing ink.