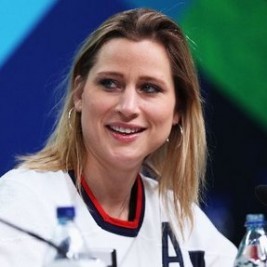 If your goal is to hire Angela Ruggiero to be your next keynote speaker or to be the next brand ambassador our celebrity speakers bureau can assist. If Angela Ruggiero’s booking fee is outside your companies budget or your unable to align with his appearance availability, our booking agents can provide you a list of talent that aligns with your event theme, budget and event date.

Angela Ruggiero is an American ice hockey defenseman. She is a member of the International Olympic Committee and was a member of the United States women's national ice hockey team, medaling in four successive Winter Olympic Games, including one gold medal. She also authored a memoir about her hockey experiences and was a contestant on the NBC reality show The Apprentice. She announced her retirement from USA's national hockey team on December 28, 2011 and is currently a student at Harvard Business School. Ruggiero was born in Panorama City, California, but grew up in Harper Woods, Michigan. On June 29, 2015, Ruggiero was announced as a member of the Hockey Hall of Fame Class of 2015.