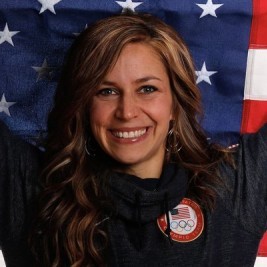 If your goal is to hire Noelle Pikus-Pace to be your next keynote speaker or to be the next brand ambassador our celebrity speakers bureau can assist. If Noelle Pikus-Pace’s booking fee is outside your companies budget or your unable to align with his appearance availability, our booking agents can provide you a list of talent that aligns with your event theme, budget and event date.

Noelle Pikus-Pace was born December 8, 1982 in Orem, Utah and is an American skeleton racer who has competed since 2000. She won three medals at the FIBT World Championships with a gold (Women's skeleton: 2007) and two silvers (Women's skeleton: 2005, Mixed bobsleigh-skeleton team event: 2007).

After winning the silver medal in the women's skeleton event at the 2005 FIBT World Championships in Calgary, Pikus-Pace emerged as one of the favorites to medal at the upcoming Winter Olympics in Turin. That would change on October 19, 2005 at the bobsleigh, luge, and skeleton track in Calgary when she broke her right leg after she and her teammates were hit by a four-man bobsleigh that failed to brake after the finish line. The bobsleigh ejected out of the end of the track and hit Pikus-Pace and teammate Lea Ann Parsley, narrowly missing three other teammates. Pikus-Pace underwent surgery to repair her broken leg, including an insertion of a titanium rod in her right leg. She would return to competition seven weeks later at Igls, Austria, finishing 20th. She would chronicle her comeback from the 2005 freak accident which prevented her participation at Turin. This story was first told in the critically acclaimed documentary 114 Days: The Race to Save a Dream. The US Bobsleigh and Skeleton Federation would petition both the FIBT and the IOC to include Pikus-Pace in the women's skeleton competition, but to no avail. The only American representative would be Katie Uhlaender in women's skeleton, and she would finish sixth in the event.

Pikus-Pace announced in an October 3, 2007 Associated Press report that she would take the 2007-08 Skeleton World Cup off due to being six months pregnant. Her child, a girl, would be due in January 2008. This was also announced on FIBT's website on October 5, 2007. On January 19, 2008, Noelle and her husband Janson welcomed their daughter Lacee Lynne Pace. She weighed 7 pounds, 12 ounces and was 21 inches long.

It was announced on 17 January 2010 that Pikus-Pace had qualified for the 2010 Winter Olympics.