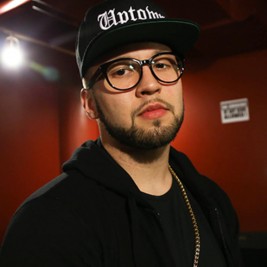 Businesses, Non-profit organizations, event planners and companies across the country have worked closely with our booking agents to hire Andy Mineo for a speaking engagements, guest appearances, product endorsements and corporate events. Many of those same clients have continued to turn to our speakers bureau as we can easily align Andy Mineo’s availability with their upcoming seminar, gala, annual conference, corporate function, and grand opening. Our close relationship with Andy Mineo’s booking agent and management team further enables us to provide inquiring clients with Andy Mineo’s speaking fee and appearance cost.

If your goal is to hire Andy Mineo to be your next keynote speaker or to be the next brand ambassador our celebrity speakers bureau can assist. If Andy Mineo’s booking fee is outside your companies budget or your unable to align with his appearance availability, our booking agents can provide you a list of talent that aligns with your event theme, budget and event date.

At just 17, Andy Mineo was living a dream; he had money, local fame and the respect of his peers. But while attending college in NYC, he finally faced the music—neither was the key to life.

Andy, formerly known as "C-Lite," grew up in a single parent home in Syracuse, New York. Without any positive male figures around, at a young age, he struggled with profanity, submission to authority and physical aggression.

With his conduct becoming uncontrollable, Andy was removed from the public school system and placed in behavioral modification centers. But change was on the horizon.

The summer before entering the 8th grade, Andy attended a Christian camp where his sister served as a counselor. While there, he heard the gospel preached clearly, cried out in desperation for Jesus to forgive him and experienced “some pretty unforgettable prayer sessions that really rocked [him].”

Andy came home with a love in his heart for people that he once hated, and knew he was changed. But, he also came back to no home church, no community, no bible study and no mentors.

So, as he rode his spiritual high into the ground and neglected to fan the flame that had begun, his relationship with God was compromised. His heart wasn’t set on pursuing Christ; instead, music and status had become his focus.

While in middle school, he began recording in his mom’s house and was buying new pieces of equipment with birthday money. Eventually, he started selling studio time out of his closet; before long, he was a sophomore in high school running a lucrative business out of his mother’s basement recording and producing hundreds of artists in Upstate New York. He had also started a rap group with a few friends that led to a deal with Syracuse University's Marshall Street Records, which gave them the opportunity to open up for the major acts that performed at SU. As a solo MC, Andy became well known in the underground freestyle rap scene for winning battle competitions during high school and his freshman year in college. Adding to his resume, he also excelled in athletics—thriving in football, basketball and lacrosse throughout high school.

Unfortunately, all of the success and recognition only led him away from God and towards greater sin. Headed for the big lights of New York City to attend college, stardom and rebellion seemed inevitable. But while taking a piano class his freshman year, Andy met Alex Medina (producer of “Background,” “The invasion (Hero)” and many other Reach tracks) who invited him to check out T.R.U.C.E. (an urban ministry that focused on evangelism via performing arts). He soon got connected with others, was discipled and the Lord began to deal with him more deeply concerning sin patterns in his life. After hearing Da Truth's “Price Tag” song, he vowed to shut down his recording studio and never use his gifts to help record music that did not honor God. He lost all his business and income, but he found his new identity in Christ.

Armed with a new purpose, Andy spent several months traveling with T.R.U.C.E. and sharing the Gospel in some of the most poverty-stricken and drug-infested neighborhoods in the U.S. He went on to release Sin is Wack Vol. 1, which caught the attention of Lecrae and many others.

To his credit, he has since been featured on Rehab, Flame’s Captured, Tedashii’s Blacklight, Ambassador’s Stop the Funeral and many other notable projects. While his introduction to a larger audience came through his vocals on Lecrae’s “Background,” and he continues to pen melodic choruses, rapping remains his passion and focus for future projects.

Entering a new season in his life, Andy decided to drop his stage name, C-Lite, in favor of his birth name; it symbolizes his aim to live out everything off stage that he pours out through his art on stage.

He recently graduated from City College of New York and currently serves on the board as a leader of a new church plant in Washington Heights.

He is also leading weekly small groups and men’s groups at his apartment, traveling on the weekends to minister and working on his highly anticipated debut album. Once divided in his ambitions, Andy has resolved to love the Lord with all his heart, soul, strength and mind—no compromise.