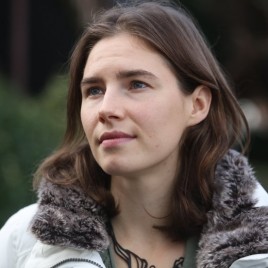 Amanda Knox's story of being wrongly-convicted was so powerful that it was turned a highly-acclaimed Netflix documentary. She will share the story of her saga as the keynote speaker for the Faces of Innocence Gala.

The event benefits the Midwest Innocence Project on April 26 in Kansas City, Missouri at the Marriott Muehlebach. MIP works towards helping others in situations like Knox's get their names cleared.

Tickets and sponsorships are still available. Those who attend will be on the edge of their seats listening to Knox recount events that changed her life forever.

Knox spent nearly four years in an Italian prison for murder before being exonerated. After being released, she has devoted her life to being a journalist and activist.

In 2013, Knox published the book, "Waiting to Be Heard: A Memoir." She has had a series of documentaries made based on her story, but the best-known one is Netflix's 2016 film, "Amanda Knox."

Knox originally studied at the University of Washington and finished her degree once she returned to the United States. She was born and raised in Seattle and is still based there.

To inquire about Amanda Knox's speaking fee and appearance cost, contact the agents at NOPACTalent by calling us at 888-550-6672 or by Starting Your Booking Request Now.

Amanda Knox Talks About Life As An Exoneree:

Have our booking experts help find you the best speaker for your event.
Authors
Connect With Us
Archives
Related Speakers
Start Your Celebrity Booking Request Now
Click Here