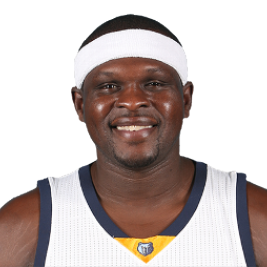 Businesses, Non-profit organizations, event planners and companies across the country have worked closely with our booking agents to hire Zach Randolph for a speaking engagements, guest appearances, product endorsements and corporate events. Many of those same clients have continued to turn to our speakers bureau as we can easily align Zach Randolph’s availability with their upcoming seminar, gala, annual conference, corporate function, and grand opening. Our close relationship with Zach Randolph’s booking agent and management team further enables us to provide inquiring clients with Zach Randolph’s speaking fee and appearance cost.

If your goal is to hire Zach Randolph to be your next keynote speaker or to be the next brand ambassador our celebrity speakers bureau can assist. If Zach Randolph’s booking fee is outside your companies budget or your unable to align with his appearance availability, our booking agents can provide you a list of talent that aligns with your event theme, budget and event date.

Zach Randolph was born July 16, 1981, nicknamed Z-Bo and is an American professional basketball player who currently plays for the Memphis Grizzlies of the National Basketball Association (NBA). He played college basketball at Michigan State University and was drafted in the 2001 NBA Draft by the Portland Trail Blazers.

On July 17, 2009, he was traded to the Memphis Grizzlies in exchange for Quentin Richardson. Randolph was selected for his first NBA All Star Game in 2010 and helped the Grizzlies improve despite failing to make it to the 2010 playoffs. On April 18, 2011, Randolph agreed to a four-year extension with the Grizzlies worth $71 million, with $66 million guaranteed. The Grizzlies made the playoffs in 2011 as the eighth seed and eliminated the top-seeded San Antonio Spurs in the first round, just the second time the eighth seed defeated the first seed since the league expanded to a seven-game first-round series. The series marked the first four wins in franchise playoff history for the Grizzlies and the first time the franchise won a playoff series. In the decisive sixth game, Randolph scored a then playoff career-high 31 points, including 17 in the fourth quarter.

Randolph then led the Grizzlies to an opening game win in their second-round playoff series, posting a playoff-career-high 34 points as the Grizzlies defeated the Oklahoma City Thunder 114–101. However, the Grizzlies fell in the second round after losing game 7 to the Thunder, 105–90.

In 2012, Randolph and the Grizzlies faced the Los Angeles Clippers in the first round of the playoffs. The Grizzlies lost the series in seven games.