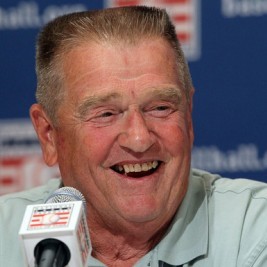 Businesses, Non-profit organizations, event planners and companies across the country have worked closely with our booking agents to hire Whitey Herzog for a speaking engagements, guest appearances, product endorsements and corporate events. Many of those same clients have continued to turn to our speakers bureau as we can easily align Whitey Herzog’s availability with their upcoming seminar, gala, annual conference, corporate function, and grand opening. Our close relationship with Whitey Herzog’s booking agent and management team further enables us to provide inquiring clients with Whitey Herzog’s speaking fee and appearance cost.

If your goal is to hire Whitey Herzog to be your next keynote speaker or to be the next brand ambassador our celebrity speakers bureau can assist. If Whitey Herzog’s booking fee is outside your companies budget or your unable to align with his appearance availability, our booking agents can provide you a list of talent that aligns with your event theme, budget and event date.

Herzog's style of play, which was nicknamed "Whiteyball," concentrated on pitching, speed, and defense to win games rather than home runs. Herzog's lineups generally consisted of one or more base-stealing threats at the top of the lineup, with a power threat such as George Brett or Jack Clark hitting third or fourth, protected by one or two hitters with lesser power, followed by more base stealers. This tactic kept payrolls low while allowing him to win a lot of games in stadiums with deep fences and artificial turf, both of which were characteristics of Royals Stadium (now Kauffman Stadium) and Busch Stadium during his managerial career.

A less noticed (at the time) aspect of Herzog's offensive philosophy was his preference for patient hitters with high on base percentages: such players included Royals Brett, Hal McRae, and Amos Otis, and Cardinals Clark, Keith Hernandez, and Ozzie Smith, as well as Darrell Porter, who played for Herzog in both Kansas City and St. Louis.