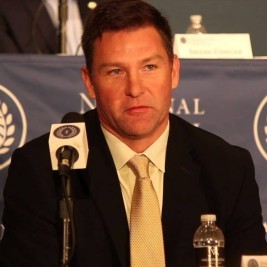 Businesses, Non-profit organizations, event planners and companies across the country have worked closely with our booking agents to hire Wesley Walls for a speaking engagements, guest appearances, product endorsements and corporate events. Many of those same clients have continued to turn to our speakers bureau as we can easily align Wesley Walls’s availability with their upcoming seminar, gala, annual conference, corporate function, and grand opening. Our close relationship with Wesley Walls’s booking agent and management team further enables us to provide inquiring clients with Wesley Walls’s speaking fee and appearance cost.

If your goal is to hire Wesley Walls to be your next keynote speaker or to be the next brand ambassador our celebrity speakers bureau can assist. If Wesley Walls’s booking fee is outside your companies budget or your unable to align with his appearance availability, our booking agents can provide you a list of talent that aligns with your event theme, budget and event date.

Wesley Walls was born March 26, 1966 and is a former tight end who played 14 seasons in the National Football League. Walls was drafted in the second round (56th overall) by the San Francisco 49ers in the 1989 NFL Draft. Despite early success in his career, including catching a nine-yard pass in the 49ers 55-10 slaughter of the Denver Broncos in Super Bowl XXIV, he was second on the depth chart behind All-Pro Brent Jones. He spent the entire 1992 NFL season and 1993 NFL season on injured reserve because of nagging shoulder injuries. In 1994, he signed as a free agent with the New Orleans Saints. Walls spent two seasons with the Saints, setting the team record for tight end receptions in 1995 with 57. He then signed a deal with the Carolina Panthers to become their starting tight end. It was in Carolina that Walls finally broke out as a player. He made the Pro Bowl five times between 1996 and 2001, only missing it during the 2000 season due to injuries that kept him out for 8 games. While at Carolina, he was also the back-up punter to Ken Walter. After Carolina declined to re-sign him in 2003, he signed with the Green Bay Packers, mostly backing up Bubba Franks, and retired the following year. Walls finished his career with 450 catches for 5,291 yards and 54 touchdowns. Upon his retirement, he was considered one of the premier tight ends in the game.