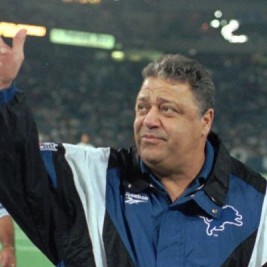 Businesses, Non-profit organizations, event planners and companies across the country have worked closely with our booking agents to hire Wayne Fontes for a speaking engagements, guest appearances, product endorsements and corporate events. Many of those same clients have continued to turn to our speakers bureau as we can easily align Wayne Fontes’s availability with their upcoming seminar, gala, annual conference, corporate function, and grand opening. Our close relationship with Wayne Fontes’s booking agent and management team further enables us to provide inquiring clients with Wayne Fontes’s speaking fee and appearance cost.

If your goal is to hire Wayne Fontes to be your next keynote speaker or to be the next brand ambassador our celebrity speakers bureau can assist. If Wayne Fontes’s booking fee is outside your companies budget or your unable to align with his appearance availability, our booking agents can provide you a list of talent that aligns with your event theme, budget and event date.

Wayne Fontes' 67 wins are the most for a head coach in Detroit Lions history. This achievement is somewhat diminished by the fact he is also the coach with most losses at 71. Nevertheless, Fontes was known for his astute coaching and innovative way of thinking.

After not being taken in the NFL Draft, Fontes played one year for the New York Titans (now the New York Jets) of the American Football League. Fontes played nine games for the Titans in the 1962 season as a defensive back recording four interceptions. He returned one interception 83 yards for a touchdown, a franchise record that would stand for 27 years.

He became an assistant football coach at MSU in 1965. He later left for the University of Dayton to serve under head coach George Perles. He also served as an assistant coach at the University of Iowa, Southern Cal, and the Tampa Bay Buccaneers. His time in Tampa Bay was a result of following John McKay to the job from USC. Fontes was hired as the defensive coordinator of the Detroit Lions in 1985.

Fontes took over the Lions as interim head coach in mid-season of 1988 after head coach Darryl Rogers was fired. Fontes then openly campaigned to have the interim tag removed and despite a lackluster 2-3 finish team owner William Clay Ford signed Fontes up to a long term deal. Fontes would bring in the gimmicky Run & Shoot offense. This is an offense highlighted by playing four wide receivers, no tight end and no fullback. Eventually Fontes would abandon the offense in a desperate maneuveur to avoid being fired.

Fontes' career highlight was when he led the Lions to the NFC Championship game in 1991. The Lions were defeated by the Washington Redskins who would go on to win Super Bowl XXVI.

The longest lasting impact that Fontes had on the franchise was his decision to draft future Hall of Fame running back Barry Sanders.

The Lions' disappointing 5-11 record in 1996 combined with Fontes' 1-4 lifetime record in the NFL playoffs finally led Ford to fire Fontes on December 26, 1996. Fontes took his firing graciously, calling Ford "the best owner in the National Football League." But then sued the Lions for injuries incurred as coach claiming it prevented him from ever being able to coach again. His lawsuit was thrown out of court without prejudice.