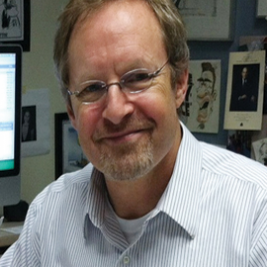 If your goal is to hire Walt Handelsman to be your next keynote speaker or to be the next brand ambassador our celebrity speakers bureau can assist. If Walt Handelsman’s booking fee is outside your companies budget or your unable to align with his appearance availability, our booking agents can provide you a list of talent that aligns with your event theme, budget and event date.

Walt Handelsman is the two-time, Pulitzer Prize-winning (1997 & 2007) editorial cartoonist/animator for Newsday in New York. His work is nationally syndicated by Tribune Media Services in Chicago to over 250 newspapers around the country and internationally. In addition to his work as an editorial cartoonist, Walt’s animation company, WALTTOON, LLC, produces high-quality humorous animations for various clients. A uniquely engaging public speaker, Walt has entertained groups across the country with his fast-paced, high-energy presentations. Combining examples of his still cartoons along with his animations, on-the-spot drawing and voice and sound impressions, Handelsman’s demonstration highlights the critical thinking skills he uses to create on deadline. Event planners find his program provocative, educational and just plain hilarious. One of the mostly widely reprinted cartoonists in America, Handelsman’s work can be seen in Newsweek, Time, The New York Times, USA Today, The Washington Post and The Chicago Tribune. He has been a featured guest on CNN, FOX and ABC’s “Nightline.” Mr. Handelsman has won every major journalism award for cartooning excellence including: The 1989 and 1993 National Headliner Award, The 1992 Society of Professional Journalists Award, The 1996 Robert F. Kennedy Journalism Award, The 2003 Scripps Howard National Journalism award and in 1997 and 2007, The Pulitzer Prize. In 2006, Walt taught himself Flash animation and in 2007 he became the first person to win the Pulitzer Prize for animation. Before joining Newsday in February of 2001, Walt worked for The Times-Picayune in New Orleans (1989-2001), The Scranton Times (1985-1989) and a chain of 13 Suburban Baltimore weeklies (1982-1985). He holds a general studies degree in advertising from the University of Cincinnati and worked in layout, design and sales for a Baltimore advertising agency before becoming a cartoonist. Walt is the author of seven collections of his editorial cartoons as well as a children’s book published in 1995. He lives with his wife and two sons in Woodbury, New York.