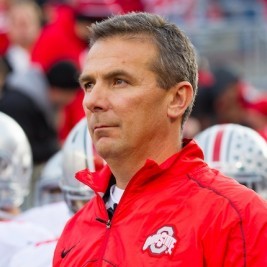 Businesses, Non-profit organizations, event planners and companies across the country have worked closely with our booking agents to hire Urban Meyer for a speaking engagements, guest appearances, product endorsements and corporate events. Many of those same clients have continued to turn to our speakers bureau as we can easily align Urban Meyer’s availability with their upcoming seminar, gala, annual conference, corporate function, and grand opening. Our close relationship with Urban Meyer’s booking agent and management team further enables us to provide inquiring clients with Urban Meyer’s speaking fee and appearance cost.

If your goal is to hire Urban Meyer to be your next keynote speaker or to be the next brand ambassador our celebrity speakers bureau can assist. If Urban Meyer’s booking fee is outside your companies budget or your unable to align with his appearance availability, our booking agents can provide you a list of talent that aligns with your event theme, budget and event date.

Urban Meyer was born July 10, 1964 and is an American college football coach and former player, currently the head football coach of the Ohio State Buckeyes. Meyer served as the head coach of the Bowling Green Falcons from 2001 to 2002, the Utah Utes from 2003 to 2004, and the Florida Gators from 2005 to 2010.

Meyer was born in Toledo, Ohio, grew up in Ashtabula, Ohio, and attended the University of Cincinnati, where he played football. During his time at the University of Florida, he coached the Gators to two BCS National Championship Game victories, during the 2006 and 2008 seasons. Meyer's winning percentage through the conclusion of the 2009 season (.842) was the highest among all active coaches with a minimum of five full seasons at a Football Bowl Subdivision (FBS) program. During his temporary retirement in 2011, he worked as a college football analyst for the television sports network ESPN. In 2014, he led the Buckeyes to their first Big Ten Conference title under his tenure as well as the program's eighth national championship. Meyer is one of two coaches (Nick Saban) to win a National Championship at two different schools.