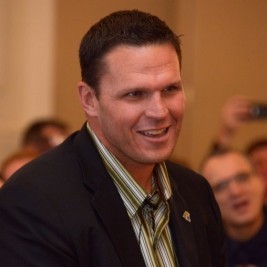 Businesses, Non-profit organizations, event planners and companies across the country have worked closely with our booking agents to hire Tony Boselli for a speaking engagements, guest appearances, product endorsements and corporate events. Many of those same clients have continued to turn to our speakers bureau as we can easily align Tony Boselli’s availability with their upcoming seminar, gala, annual conference, corporate function, and grand opening. Our close relationship with Tony Boselli’s booking agent and management team further enables us to provide inquiring clients with Tony Boselli’s speaking fee and appearance cost.

If your goal is to hire Tony Boselli to be your next keynote speaker or to be the next brand ambassador our celebrity speakers bureau can assist. If Tony Boselli’s booking fee is outside your companies budget or your unable to align with his appearance availability, our booking agents can provide you a list of talent that aligns with your event theme, budget and event date.

Boselli played quarterback while a freshman in high school in Boulder, but later switched to linebacker and tight end as a sophomore in order to receive more playing time.

While at USC, Boselli was a first team All-American and All-Pac 10 choice in 1994 and 1995. He was also a member of the Sigma Alpha Epsilon fraternity.

He was the first player drafted by the Jaguars in the 1995 NFL draft; the first player ever picked by that team. He quickly became recognised as one of the best left tackles in the game, and appeared in five Pro Bowls despite gaining a reputation for being fragile.

Tony Boselli was selected as the first pick of the 2002 Houston Texans expansion draft. However, due to frequent injuries over the previous two years, that were treated improperly by Jaguars team doctors and the surgeon they sent him to, he was placed on injured reserve, and retired after the season, never having played a single down for the Texans. It was later learned that the doctor who performed Boselli's shoulder surgery had attached a tendon to the wrong spot and in doing so had caused it to atrophy during rehabilitation exercises. The Texans decision to select Boselli in the expansion draft was highly questioned following his retirement and to this day there are those in Houston who feel that the Jacksonville Jaguars knew perfectly well that he was "damaged goods" before the draft. It's often speculated that the Texans selected Boselli first in the expansion draft with an understanding that the Jaguars would then allow the Texans to select both Seth Payne, who remains a starter for the Texans to this day, and Gary Walker. Even though Tony Boselli failed to play for the Texans his selection as the first player taken in the expansion draft was seen as a clear sign of the direction that the Houston Texans wished to go.