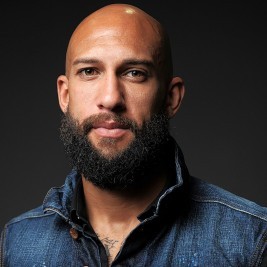 Businesses, Non-profit organizations, event planners and companies across the country have worked closely with our booking agents to hire Tim Howard for a speaking engagements, guest appearances, product endorsements and corporate events. Many of those same clients have continued to turn to our speakers bureau as we can easily align Tim Howard’s availability with their upcoming seminar, gala, annual conference, corporate function, and grand opening. Our close relationship with Tim Howard’s booking agent and management team further enables us to provide inquiring clients with Tim Howard’s speaking fee and appearance cost.

If your goal is to hire Tim Howard to be your next keynote speaker or to be the next brand ambassador our celebrity speakers bureau can assist. If Tim Howard’s booking fee is outside your companies budget or your unable to align with his appearance availability, our booking agents can provide you a list of talent that aligns with your event theme, budget and event date.

Tim Howard is an American soccer player who plays as a goalkeeper for English club Everton and the United States national team.

Howard started his career with the North Jersey Imperials before making a move to the MetroStars. His appearances soon attracted the attention of Manchester United, who signed him in 2003. He enjoyed relative success with them as they won the 2003 FA Community Shield, the 2003–04 FA Cup and the 2005–06 League Cup. However, after United signed Edwin van der Sar, Howard went out on loan to Everton to play more first-team soccer and eventually signed permanently with them in February 2007. On January 4, 2012, Howard scored a goal, his first as a professional, against Bolton Wanderers. This made him only the fourth goalkeeper to score a goal in a Premier League match.

Howard is the most capped goalkeeper of all-time for the United States with over 100 caps since his debut in 2002. He was an unused substitute for the 2006 World Cup but later established himself as first-choice and started all of the United States' games at the 2010 and 2014 World Cups. The team reached the Round of 16 on both occasions, and during the latter Howard set a World Cup record for most saves in a match with 15.

Howard's book, The Keeper, published in 2014, describes his career and his life with Tourette syndrome and obsessive compulsive disorder.