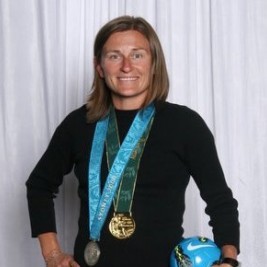 If your goal is to hire Tiffeny Milbrett to be your next keynote speaker or to be the next brand ambassador our celebrity speakers bureau can assist. If Tiffeny Milbrett’s booking fee is outside your companies budget or your unable to align with his appearance availability, our booking agents can provide you a list of talent that aligns with your event theme, budget and event date.

Women's soccer player, Tiffeny Milbrett was born October 23, 1972 in Portland, Oregon who was a long time member of the United States women's national soccer team and currently plays for the Vancouver Whitecaps Women in the W-League.

She was a member of the US-under 20 team from 1990 to 1993, and saw her first action in 1991, against China. She scored her first goal with that selection in 1992, against Norway, and helped the team win the International Women's Tournament in France in '93. She played a total of 21 games with the senior team during that period, and in 1995, she finally joined the senior team full time. She was a member of the team that finished third at the World Cup that year in Sweden, and in 1996, she became a starter for the team that won the 1996 Olympic gold medal in Atlanta, scoring the game winning goal in the gold medal game against China. In 1997, she set a women's national team record with five assists in a game against Australia, and in 1998, she was a member of the team that won the gold medal at the Goodwill Games. In 1999, she was the goal leader on the USA team that won the World Cup, and in 2000 she helped the team obtain Olympic Games silver in Sydney. She was named the CONCACAF Offensive Player of The Year that same year, as well as Chevrolet's female athlete of the year. She was also nominated along with Hamm and Sun Wen for the first ever FIFA World Player of the Year award, and participated in the 2001 Nike Women's Cup. She also won the Chevrolet Female Athlete of the Year Award for the second time in a row in 2001.

A player who enjoys signing autographs for her fans, she is in the top five all-time in the United States national soccer team in three offensive categories.