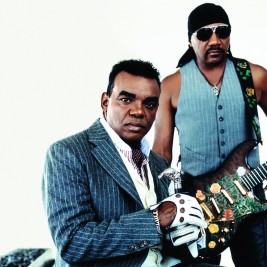 Travel Location
Available Upon Request
Book The Isley Brothers For

Book The Isley Brothers for a Speaking Engagement

If your goal is to hire The Isley Brothers to be your next keynote speaker or to be the next brand ambassador our celebrity speakers bureau can assist. If The Isley Brothers’s booking fee is outside your companies budget or your unable to align with his appearance availability, our booking agents can provide you a list of talent that aligns with your event theme, budget and event date.

The first generation of Isley siblings was born and raised in Cincinnati, OH, where they were encouraged to begin a singing career by their father, himself a professional vocalist, and their mother, a church pianist who provided musical accompaniment at their early performances. Initially a gospel quartet, the group was comprised of Ronald, Rudolph, O'Kelly, and Vernon Isley; after Vernon's 1955 death in a bicycling accident, tenor Ronald was tapped as the remaining trio's lead vocalist. In 1957, the brothers went to New York City to record a string of failed doo wop singles; while performing a spirited reading of the song "Lonely Teardrops" in Washington, D.C., two years later, they interjected the line "You know you make me want to shout," which inspired frenzied audience feedback. An RCA executive in the audience saw the concert, and when he signed the Isleys soon after, he instructed that their first single be constructed around their crowd-pleasing catch phrase; while the call-and-response classic "Shout" failed to reach the pop Top 40 on its initial release, it eventually became a frequently covered classic.

Still, success eluded the Isleys, and only after they left RCA in 1962 did they again have another hit, this time with their seminal cover of the Top Notes' "Twist and Shout." Like so many of the brothers' early R&B records, "Twist and Shout" earned greater commercial success when later rendered by a white group -- in this case, the Beatles; other acts who notched hits by closely following the Isleys' blueprint were the Yardbirds ("Respectable," also covered by the Outsiders), the Human Beinz ("Nobody but Me"), and Lulu ("Shout"). During a 1964 tour, they recruited a young guitarist named Jimmy James to play in their backing band; James -- who later shot to fame under his given name, Jimi Hendrix -- made his first recordings with the Isleys, including the single "Testify," issued on the brothers' own T-Neck label. They signed to the Motown subsidiary Tamla in 1965, where they joined forces with the famed Holland-Dozier-Holland writing and production team. Their first single, the shimmering "This Old Heart of Mine (Is Weak for You)," was their finest moment yet, and barely missed the pop Top Ten.

"This Old Heart of Mine" was their only hit on Motown, however, and when the song hit number three in Britain in 1967, the Isleys relocated to England in order to sustain their flagging career; after years of writing their own material, they felt straitjacketed by the Motown assembly-line production formula, and by the time they returned stateside in 1969, they had exited Tamla to resuscitate the T-Bone label. Their next release, the muscular and funky "It's Your Thing," hit number two on the U.S. charts in 1969, and became their most successful record. That year, the Isleys also welcomed a number of new members as younger brothers Ernie and Marvin, brother-in-law Chris Jasper, and family friend Everett Collins became the trio's new backing unit. Spearheaded by Ernie's hard-edged guitar leads, the group began incorporating more and more rock material into its repertoire as the 1970s dawned, and scored hits with covers of Stephen Stills' "Love the One You're With," Eric Burdon & War's "Spill the Wine," and Bob Dylan's "Lay Lady Lay."

In 1973, the Isleys scored a massive hit with their rock-funk fusion cover of their own earlier single "Who's That Lady," retitled "That Lady, Pt. 1"; the album 3 + 3 also proved highly successful, as did 1975's The Heat Is On, which spawned the smash "Fight the Power, Pt. 1." As the decade wore on, the group again altered its sound to fit into the booming disco market; while their success on pop radio ran dry, they frequently topped the R&B charts with singles like 1977's "The Pride," 1978's "Take Me to the Next Phase, Pt. 1," 1979's "I Wanna Be With You, Pt. 1," and 1980's "Don't Say Goodnight." While the Isleys' popularity continued into the 1980s, Ernie and Marvin, along with Chris Jasper, defected in 1984 to form their own group, Isley/Jasper/Isley; a year later, they topped the R&B charts with "Caravan of Love." On March 31, 1986, O'Kelly died of a heart attack; Rudolph soon left to join the ministry, but the group reunited in 1990. Although the individual members continued with solo work and side projects, the Isley Brothers forged on in one form or another throughout the decade; in 1996, now consisting of Ronald, Marvin, and Ernie, they released the album Mission to Please. Ronald and Ernie hooked up several years later for Eternal (2001), a brand-new selection of R&B cuts featuring collaborative efforts with Jill Scott, Jimmy Jam and Terry Lewis, and Raphael Saadiq. On that particular release, Ronald also introduced the alter ego Mr. Biggs. Body Kiss (2003) and Baby Makin' Music (2006) followed. ~ Jason Ankeny, All Music Guide

Read More About The Isley Brothers

NOPACTalent acts as a Celebrity Speakers Bureau and Athlete Booking agency for corporate functions, appearances, private events and speaking engagements. NOPACTalent does not claim or represent itself as The Isley Brothers’s speakers bureau, agent, manager or management company for The Isley Brothers or any celebrity on this website. NOPACTalent represents organizations seeking to hire motivational speakers, athletes, celebrities and entertainers for private corporate events, celebrity endorsements, personal appearances, and speaking engagements.