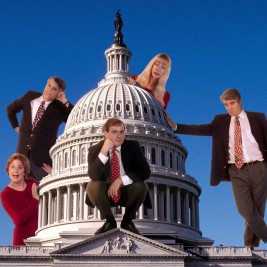 Travel Location
Available Upon Request
Book The Capitol Steps For

Book The Capitol Steps for a Speaking Engagement

If your goal is to hire The Capitol Steps to be your next keynote speaker or to be the next brand ambassador our celebrity speakers bureau can assist. If The Capitol Steps’s booking fee is outside your companies budget or your unable to align with his appearance availability, our booking agents can provide you a list of talent that aligns with your event theme, budget and event date.

The Capitol Steps are a group of former Congressional Staffers who satirize their previous employers all over the country in more than 300 shows per year.

Despite being based in Washington,D.C., 90% of the Steps performances are not local.  Being targets themselves, some celebrities and politicians such as Sam Donaldson, Al Gore, Larry King, Pat Robertson, Fawn Hall, Surgeon General Koop, and President Bush have performed with the Capitol Steps. The group has actually done performances for Presidents Reagan, Ford, Clinton, and Bush.

They have recorded 16 albums, such as: "Return to Center," "Lord of the Fries," "A Whole Newt World," and "The Joy of Sax"; all of which were done during the Clinton administration. Among these albums are also included; "76 Bad Loans," "Stand By Your Dan," "We Arm the World," and "Fools on the Hill."

This group was formed by Elaina Newport, Jim Aidala and Bill Strauss in December of 1981 during the Reagan administration. The group now consists of 20 cast members, six of which are on stage for any one show.

Read More About The Capitol Steps

NOPACTalent acts as a Celebrity Speakers Bureau and Athlete Booking agency for corporate functions, appearances, private events and speaking engagements. NOPACTalent does not claim or represent itself as The Capitol Steps’s speakers bureau, agent, manager or management company for The Capitol Steps or any celebrity on this website. NOPACTalent represents organizations seeking to hire motivational speakers, athletes, celebrities and entertainers for private corporate events, celebrity endorsements, personal appearances, and speaking engagements.