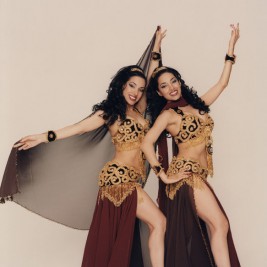 Travel Location
Available Upon Request
Book The Belly Twins For

Book The Belly Twins for a Speaking Engagement

If your goal is to hire The Belly Twins to be your next keynote speaker or to be the next brand ambassador our celebrity speakers bureau can assist. If The Belly Twins’s booking fee is outside your companies budget or your unable to align with his appearance availability, our booking agents can provide you a list of talent that aligns with your event theme, budget and event date.

Neena & Veena, "The Bellytwins," have been featured as special guest dancers, choreographers, and actresses on hundreds of national and international stages, films, TV shows, commercials and music videos. The twins are also the founders, artistic directors and choreographers and teachers of their own dance company, which specializes in dances of India and the Middle East. Their recent 2 ½ hour live production of Hooray for Bollywood! received and continues to receive rave reviews from a sold-out audience and media. The show is in current negotiations for a U.S., European, and Asian tour.

Some television credits include Academy Awards, Live with Regis and Kelly, ER, The View, American Music Awards, and The Early Show. Neena & Veena have also been the center of Hollywood's TV gossip and news shows such as Entertainment Tonight, Extra, E!, and several segments on both CNN and VH-1. The twins have also made their mark on worldwide television networks including BBC (UK), CTV (Canada), Univision (Latin), Zee TV (India), Sony (India), RTN (Russia). Numerous national and international magazine and newspaper articles have been written about the twins in prestigious publications including InStyle, YM, Time, Muscle & Fitness, Harpers Bazaar, New York Daily News, and Fit.

Neena & Veena have been spotlighted in several books, and now they have a multi-book deal of their own with a reputable publishing company. Their first book, The Way Of The Belly received a rave reviews including a starred review from Publishers Weekly.

Neena & Veena have produced fifteen instructional and fitness videos, some of which had long runs on the Billboard Top Ten charts. Fitness magazine named some of their videos as one of the "Top Ten Videos of the Year." The Bellytwins have sold millions of videos and DVDs worldwide.

Read More About The Belly Twins

NOPACTalent acts as a Celebrity Speakers Bureau and Athlete Booking agency for corporate functions, appearances, private events and speaking engagements. NOPACTalent does not claim or represent itself as The Belly Twins’s speakers bureau, agent, manager or management company for The Belly Twins or any celebrity on this website. NOPACTalent represents organizations seeking to hire motivational speakers, athletes, celebrities and entertainers for private corporate events, celebrity endorsements, personal appearances, and speaking engagements.