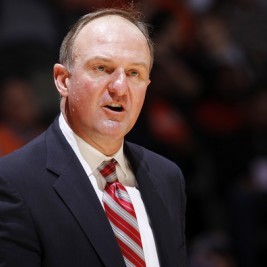 Businesses, Non-profit organizations, event planners and companies across the country have worked closely with our booking agents to hire Thad Matta for a speaking engagements, guest appearances, product endorsements and corporate events. Many of those same clients have continued to turn to our speakers bureau as we can easily align Thad Matta’s availability with their upcoming seminar, gala, annual conference, corporate function, and grand opening. Our close relationship with Thad Matta’s booking agent and management team further enables us to provide inquiring clients with Thad Matta’s speaking fee and appearance cost.

If your goal is to hire Thad Matta to be your next keynote speaker or to be the next brand ambassador our celebrity speakers bureau can assist. If Thad Matta’s booking fee is outside your companies budget or your unable to align with his appearance availability, our booking agents can provide you a list of talent that aligns with your event theme, budget and event date.

Thad Matta was born July 11, 1967 and is an American college basketball coach and the current head coach of the Ohio State Buckeyes men's basketball team. He was hired as the 13th head coach in Ohio State history on July 7, 2004 after the school had fired previous coach Jim O'Brien. He is the only coach nationally to post 20 or more wins in each of his first 13 seasons as a head coach. Matta has led the Buckeyes to five Big Ten Conference regular season championships, three Big Ten Tournament titles (2007, 2010, and 2011), a runner-up finish in the 2007 NCAA Men's Division I Basketball Tournament, the 2008 NIT Championship, and a second Final Four berth in 2012. Matta also tied the record for most wins by a first-year coach at Ohio State (20).

Matta, a finalist for the 2002–03 Naismith National Coach of the Year Award, began his duties in Columbus on July 7, 2004. No time was wasted preparing for his first season in Columbus, which culminated in a 65–64 victory over undefeated and top–ranked University of Illinois in the regular-season finale at Value City Arena before a packed house and a national television audience. The Buckeyes' final record for the 2004–05 campaign was 20–12, but were ineligible from postseason play.

In the 2005–06 season Matta led the Buckeyes to an outright Big Ten Championship for the first time since 1992, finishing one game ahead of the Iowa and Illinois. The Buckeyes' season came to an end during the second round of the NCAA tournament when they lost to Georgetown on March 19, 2006. Their final overall record was 26–6. The Buckeyes were thought to be a year away from competing for the league crown, as they were to add a highly regarded recruiting class, dubbed the "Thad Five", led by center Greg Oden of Lawrence North High School in Indianapolis for the 2006–07 season. The Buckeyes did win the Big Ten and Matta led Ohio State all the way to the national championship game, where they lost to Florida.

In the 2007–08 season, Matta's Buckeyes did not make the NCAA tournament. However, they won the 2008 NIT championship, despite playing with four new starters for the second consecutive year.

In the 2010–11 season, Matta's Buckeyes were 29–2, ranked #1 in all polls (16–2 in conference play), and won the outright Big Ten Championship. The Buckeyes beat Penn State on March 13 to win their 2nd consecutive Big Ten Tournament title. The Buckeyes were the overall number one seed in the 2011 NCAA tournament and the number one seed in the Eastern bracket, where the Buckeyes won two games in Cleveland before losing to eventual Eastern regional champion Kentucky.