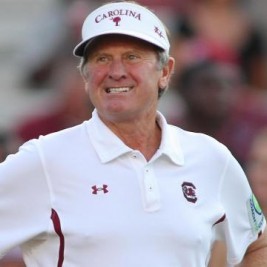 Businesses, Non-profit organizations, event planners and companies across the country have worked closely with our booking agents to hire Steve Spurrier for a speaking engagements, guest appearances, product endorsements and corporate events. Many of those same clients have continued to turn to our speakers bureau as we can easily align Steve Spurrier’s availability with their upcoming seminar, gala, annual conference, corporate function, and grand opening. Our close relationship with Steve Spurrier’s booking agent and management team further enables us to provide inquiring clients with Steve Spurrier’s speaking fee and appearance cost.

If your goal is to hire Steve Spurrier to be your next keynote speaker or to be the next brand ambassador our celebrity speakers bureau can assist. If Steve Spurrier’s booking fee is outside your companies budget or your unable to align with his appearance availability, our booking agents can provide you a list of talent that aligns with your event theme, budget and event date.

Steve Spurrier was born April 20, 1945 and is a football coach and former player. He was the head football coach at the University of South Carolina until midway through the 2015 season. He also is a former professional player and coach. Spurrier is a native of Florida who graduated from Science Hill High School in Tennessee. He is a graduate of the University of Florida, where he played college football for the Florida Gators. Spurrier was a two-time All-American quarterback and Heisman Trophy winner for the Gators and was inducted into the College Football Hall of Fame as a player in 1986. He played professional football for ten seasons during the 1960s and 1970s with the San Francisco 49ers and the Tampa Bay Buccaneers of the National Football League (NFL).

After retiring as a player, Spurrier served as a college assistant before being hired as the head coach of the United States Football League's Tampa Bay Bandits in 1983. The Bandits had a successful three-season run but folded along with the league after the 1985 season, and Spurrier moved on to Duke University, where he led his 1989 squad to the school's first conference championship since 1962 and last to date. He returned to the University of Florida to become the Gators' head coach in 1990. From then until 2001, he led his alma mater to its first six Southeastern Conference championships and its first consensus national championship in 1996. After a brief and largely disappointing run with the NFL's Washington Redskins, Spurrier returned to the college game in 2005, when he became head coach of the South Carolina Gamecocks. At South Carolina, he brought the program to unprecedented levels of success and became the winningest football coach in school history. Spurrier is also the first Heisman Trophy winner to coach a Heisman Trophy winner.