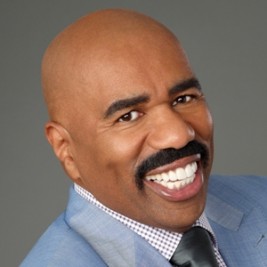 Businesses, Non-profit organizations, event planners and companies across the country have worked closely with our booking agents to hire Steve Harvey for a speaking engagements, guest appearances, product endorsements and corporate events. Many of those same clients have continued to turn to our speakers bureau as we can easily align Steve Harvey’s availability with their upcoming seminar, gala, annual conference, corporate function, and grand opening. Our close relationship with Steve Harvey’s booking agent and management team further enables us to provide inquiring clients with Steve Harvey’s speaking fee and appearance cost.

If your goal is to hire Steve Harvey to be your next keynote speaker or to be the next brand ambassador our celebrity speakers bureau can assist. If Steve Harvey’s booking fee is outside your companies budget or your unable to align with his appearance availability, our booking agents can provide you a list of talent that aligns with your event theme, budget and event date.

Steve Harvey is one of the most respected African- American comedians on the scene today.

Harvey's big break was his job as host of It's Showtime at the Apollo, due to his success there, the WB network gave him his own show, Steve Harvey Show. After his show ended, Harvey toured as one of the Kings of Comedy, which would later be put into a film called The Original Kings of Comedy.

Harvey has authored a book, Steve Harvey's Big Time, the title was also used as the name of Harvey's comedy television show which aired on The WB network.

Steve Harvey is an American actor, comedian, entertainer, television/radio personality and best-selling author who hosts "The Steve Harvey Morning Show," "Steve Harvey," and "Family Feud." He is the author of "Act Like a Lady, Think Like a Man," which was published in March 2009, and the book "Straight Talk, No Chaser: How to Find and Keep a Man."

He starred in "The Steve Harvey Show," and he was featured in "The Original Kings of Comedy." He also hosts the "Steve Harvey Project," on an extended cable channel.

Steve Harvey first performed stand-up comedy on October 8, 1985 at the Hilarities Comedy Club in Cleveland, Ohio. He was a finalist in Second Annual Johnnie Walker National Comedy Search performing on April 16, 1990, eventually leading to a long stint as host of "It's Showtime" at the Apollo, succeeding Mark Curry in that role. His success as a stand-up comedian led to a starring role on the ABC show "Me and the Boys" in 1994. He would later star on the WB network show, "The Steve Harvey Show," which ran from 1996 to 2002. While popular in the African-American community (the show won multiple NAACP Image Awards), the show never achieved critical acclaim outside of the African-American community, a matter about which Harvey has often complained.

In 1997, Harvey continued his work in stand-up comedy, touring as one of the Kings of Comedy, along with Cedric the Entertainer, D.L. Hughley and Bernie Mac. The comedy act would later be put together into a film by Spike Lee called "The Original Kings of Comedy." Harvey released a hip hop and R&B audio CD on a record label he founded, and authored a book, "Steve Harvey's Big Time." That title was also used as the name of Harvey's comedy and variety television show (later renamed "Steve Harvey's Big Time Challenge"), which aired on The WB network from 2003 until 2005. Harvey also launched a clothing line which featured a line of dress wear.

In 2005 he co-starred in the movie "Racing Stripes." He had appeared in the 2003 movie "The Fighting Temptations" alongside Cuba Gooding Jr. and Beyoncé Knowles. Harvey achieved further critical and commercial success through his book "Act Like a Lady, Think Like a Man" and its subsequent cinematic follow-up "Think Like a Man," an ensemble romantic comedy depicting characters taking advice on dating from the book.

In 2008, Harvey hosted the Disney Dreamers Academy with Steve Harvey, a teen-focused personal and professional enrichment event that took place January 17–20, 2008 at the Walt Disney World Resort in Lake Buena Vista, Florida. Harvey along with a team of judges chose 100 teens to attend the event.

Harvey began hosting "Family Feud" in September 2010, and is the first African American to do so. The show has seen significantly improved ratings under Harvey. As of November 2012, it is the second most-watched daytime syndicated show.