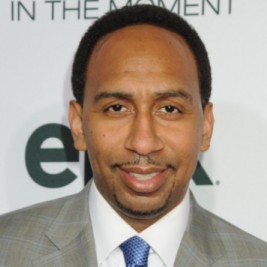 Book Stephen A. Smith for a Speaking Engagement

If your goal is to hire Stephen A. Smith to be your next keynote speaker or to be the next brand ambassador our celebrity speakers bureau can assist. If Stephen A. Smith’s booking fee is outside your companies budget or your unable to align with his appearance availability, our booking agents can provide you a list of talent that aligns with your event theme, budget and event date.

Stephen A. Smith, more commonly known as Stephen A., is an American television personality, host, radio host, and former sports journalist. Smith is a commentator on ESPN First Take, where he appears with Skip Bayless and Molly Qerim. Smith formerly hosted The Stephen A. Smith and Ryan Ruocco Show on ESPN Radio New York 98.7 FM and is a featured columnist for ESPNNY.com.

A seasoned sports journalist and ESPN veteran, Stephen A. Smith is an emerging media go-to who adeptly applies his savvy insights into the world of sports to society at large, drawing parallels to such issues as politics and race relations in America. As a guest on such shows as Morning Joe, The Ed Show, Hannity, and Larry King Live, he offers his candid views on issues relating to race, politics, and current events.

Currently, Smith - who originally made his mark as one of the most respected sports analysts and commentators in basketball - hosts a weeknight radio show for ESPN, airing in New York City and Los Angeles. Previously, he worked as an analyst and insider on ESPN's premier basketball show, NBA Shootaround, later appearing on SportsCenter, ESPNews, and his own talk show, Quite Frankly.

With his trademark candor and sense of humor, Smith inspires and entertains audiences as he touches on issues applicable both on the field and off, including staying strong in the face of adversity, being a leader, and living an ethical life.

Read More About Stephen A. Smith

NOPACTalent acts as a Celebrity Speakers Bureau and Athlete Booking agency for corporate functions, appearances, private events and speaking engagements. NOPACTalent does not claim or represent itself as Stephen A. Smith’s speakers bureau, agent, manager or management company for Stephen A. Smith or any celebrity on this website. NOPACTalent represents organizations seeking to hire motivational speakers, athletes, celebrities and entertainers for private corporate events, celebrity endorsements, personal appearances, and speaking engagements.