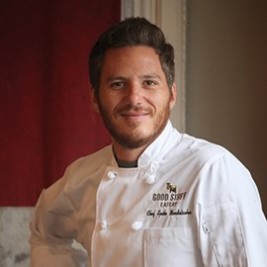 If your goal is to hire Spike Mendelsohn to be your next keynote speaker or to be the next brand ambassador our celebrity speakers bureau can assist. If Spike Mendelsohn’s booking fee is outside your companies budget or your unable to align with his appearance availability, our booking agents can provide you a list of talent that aligns with your event theme, budget and event date.

Chef Spike Mendelsohn is currently in the kitchen at Good Stuff Eatery in Washington, DC, where the First Family has visited several times. Good Stuff Eatery was inspired by his vision for a place where people can enjoy the nostalgia of eating the best of their American favorites: handcrafted burgers, handcut fries, and handspun shakes made with the highest quality fresh farm ingredients.

He's expanded his unique approach into the pizza world as well, opening a second restaurant, We the Pizza, an instant local favorite.

Spike was a fan favorite on the fourth season of Bravo's Top Chef, but contends that "becoming a 'Top Chef' cannot be accomplished on a reality show, because it takes a lifetime…"

Mendelsohn was 13 years old when he had his first real experience in the kitchen. His parents owned and operated a restaurant in St. Petersburg, Florida where he spent most nights and weekends washing dishes and running around the dining room as a busboy. One night in the heat of the kitchen, one of his mom's main sauté cooks was unable to work, so Mendelsohn jumped right in to take over.

The restaurant had 350 seats and a 45 minute wait. In the panic of the moment his mom looked over at the dishwashing section and motioned for him to get on the line and replace the sauté cook. When his mother saw him flipping sauté pans in the air, slamming the oven doors with his foot and handling the food with care and finesse, she instantly knew he would be a great chef one day.

Aware of his potential and understanding the level of commitment it takes to become a great chef, his mom made him a deal: work for one fully year and live up to the demands of a chef; learn some humility and perserverance…and she and his dad would send him to any chef school anywhere in the world.

He is a former chef at Mai House, which was named one of New York City's 10 best restaurants by The New York Times, and he's also worked at such highly rated restaurants as Bouchon in Napa Valley, Les Crayeres in France and Le Cirque in New York City.

Mendolsohn can be seen on the Top Chef Tour Bus and Food Network's Food 2 show By The Book, Off The Hook and as host on the show The Original Recipe where he travels the world discovering the origins of different foods. He is also a correspondent for CBS' Early Show.