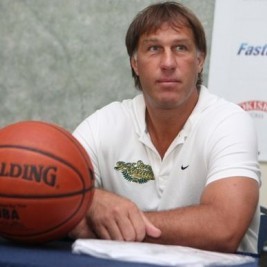 If your goal is to hire Sarunas Marciulionis to be your next keynote speaker or to be the next brand ambassador our celebrity speakers bureau can assist. If Sarunas Marciulionis’s booking fee is outside your companies budget or your unable to align with his appearance availability, our booking agents can provide you a list of talent that aligns with your event theme, budget and event date.

Raimondas Šarūnas Marčiulionis is a retired Lithuanian professional basketball player. Born in Kaunas, he was one of the first Europeans to become a regular in the North American National Basketball Association. In the 1988 Seoul Olympics Basketball Tournament, together with teammate Arvydas Sabonis, he led the USSR national team to a gold medal in basketball. On August 8, 2014, Marčiulionis was inducted into the Naismith Memorial Basketball Hall of Fame.

Marčiulionis started his pro basketball career with Statyba in the USSR League, the forerunner of the VTB United League in 1981. Marčiulionis was drafted by the Golden State Warriors in the 6th round of the 1987 NBA draft. He moved to the NBA in 1989 and he played four years with the Warriors, finishing as the runner-up for the Sixth Man of the Year Award in both 1992 and 1993. Marčiulionis became one of the first Europeans to get significant playing time in the NBA, helping to lead the way for the internationalization of the league in the late 1990s. After missing a year and a half with a leg injury, he was traded to the Seattle SuperSonics in 1994, then traded to the Sacramento Kings in 1995, and he finished his NBA career with the Denver Nuggets in the 1996–97 season.

Following the restoration of Lithuanian independence in 1990, Marčiulionis almost single-handedly resurrected the Lithuanian national team. He contacted prospective players, encouraged several to join, selected the uniforms, negotiated a shoe deal, and arranged for sponsorships. The trademarked 'Slam Dunking Skeleton, Skullman' t-shirt design was created by and is owned by N.Y. sports artist Greg Speirs of skullman.com. Speirs became the major sponsor when he donated 100% of his profits from his design to fund the team and to Lithuanian children's charities amounting to at least $450,000. The team went on to win a bronze medal at the 1992 Summer Olympics. Marčiulionis was again a bronze medalist with Lithuania at the 1996 Atlanta Olympic Basketball Tournament. In 1995, he was named the Most Valuable Player of the 1995 FIBA European Championship, after leading Lithuania to a silver medal in the tournament. He also won the silver medal at the 1987 FIBA European Championship. In 1987, 1989, 1990, and 1991, he was voted as the best sportsman in Lithuania.