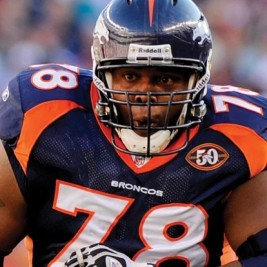 Businesses, Non-profit organizations, event planners and companies across the country have worked closely with our booking agents to hire Ryan Clady for a speaking engagements, guest appearances, product endorsements and corporate events. Many of those same clients have continued to turn to our speakers bureau as we can easily align Ryan Clady’s availability with their upcoming seminar, gala, annual conference, corporate function, and grand opening. Our close relationship with Ryan Clady’s booking agent and management team further enables us to provide inquiring clients with Ryan Clady’s speaking fee and appearance cost.

If your goal is to hire Ryan Clady to be your next keynote speaker or to be the next brand ambassador our celebrity speakers bureau can assist. If Ryan Clady’s booking fee is outside your companies budget or your unable to align with his appearance availability, our booking agents can provide you a list of talent that aligns with your event theme, budget and event date.

Ryan Jacob Clady is an American football offensive tackle for the Denver Broncos of the National Football League. He played college football for Boise State University, and earned consensus All-American honors. The Denver Broncos chose Clady in the first round of the 2008 NFL Draft, and he has been selected for the Pro Bowl four times.

Clady started every game during the 2008 NFL season and gave up just a half of a sack while committing only three penalties. Following Week 12 of the 2008 NFL season, Peter King of Sports Illustrated said Clady was the third-best rookie overall. On December 12, 2008, Clady won the Diet Pepsi NFL Rookie of the Week award, after his game against the Kansas City Chiefs. That was the first time all season that a lineman, either offensive or defensive, won the award.

Clady finished third in voting behind Matt Ryan and Chris Johnson for the 2008 NFL Offensive Rookie of the Year Award. He was the only offensive lineman to receive any votes. He was the only starting NFL offensive lineman to give up less than one sack for the entire season. He was named to the Associated Press NFL All-Pro Second Team behind Michael Roos and Jordan Gross.

In 2009, The Sporting News listed Clady as the No. 1 offensive tackle in the NFL. After the Broncos' October 4, 2009 victory over the Dallas Cowboys, Clady set a new NFL record for consecutive games to start a career without giving up a full sack. Through 20 games, he has surrendered only half of a sack. Clady was named a starter for the 2009 Pro Bowl and was named First-team All-Pro by the Sporting News and Associated Press after the 2009 season.

On April 28, 2010, Clady injured his patella tendon while playing basketball but did not miss a game the following season.

In 2011, Clady played all 16 games and was added to the 2012 Pro Bowl roster along with teammate Willis McGahee. After the season, the Broncos tried to sign Clady to a long-term deal and offered him a 5-year $50 million deal with $28 million guaranteed, but he refused.

In the 2012 season, Clady allowed just one sack the entire season. Towards the end of the season, he tore a labrum in his right shoulder, but still did not miss any time. He played the last few games of the season including the playoffs with the injury, and had surgery to repair it only after the season ended. He was selected to the 2013 Pro Bowl but did not play because of his shoulder.

On March 1, 2013, in order to prevent Clady from becoming an unrestricted free agent, the Broncos assigned him with the franchise tag worth $9.823 million. On July 14, 2013. Clady agreed to a new contract with the Broncos worth $52.5 million for five years. Of that, $33 million is guaranteed over the first three years of the contract. There is a maximum of $5 million in incentives attached to the deal. If Clady is named to the Associated Press's All-Pro team, then he would receive an extra $500,000 each subsequent season. Should he be named to the team a second time, he will receive an extra $1.5 million. The deal came one day prior to the July 15th Deadline to extend "franchise tagged" Players.

On September 18, 2013, Clady was placed on season-ending injured reserve, due to a Lisfranc injury he suffered during a week two matchup against the New York Giants. The Denver Broncos signed Winston Justice to replace his roster spot.