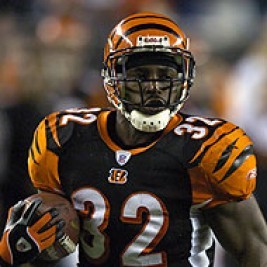 Businesses, Non-profit organizations, event planners and companies across the country have worked closely with our booking agents to hire Rudi Johnson for a speaking engagements, guest appearances, product endorsements and corporate events. Many of those same clients have continued to turn to our speakers bureau as we can easily align Rudi Johnson’s availability with their upcoming seminar, gala, annual conference, corporate function, and grand opening. Our close relationship with Rudi Johnson’s booking agent and management team further enables us to provide inquiring clients with Rudi Johnson’s speaking fee and appearance cost.

If your goal is to hire Rudi Johnson to be your next keynote speaker or to be the next brand ambassador our celebrity speakers bureau can assist. If Rudi Johnson’s booking fee is outside your companies budget or your unable to align with his appearance availability, our booking agents can provide you a list of talent that aligns with your event theme, budget and event date.

Bengals star running back, Rudi Johnson was born October 1, 1979 in Petersburg, Virginia. He was drafted by the Bengals out of Auburn University with the fifth pick of the fourth round of the 2001 NFL Draft. He became the Bengals starting running back after they traded away Corey Dillon.

At Auburn University, Johnson finished his career with 324 rushing attempts for 1567 yards. His 324 rushing attempts was a school single season record and his 1567 rushing yards were the second-most in the school's history. He had ten games where he rushed for 100 yards or more. He was a sociology major.

Johnson is considered one of the NFL's better running backs and one of the main reasons for the Bengals' dramatic improvement. In 2005, Johnson shared tailback duties with former University of Michigan running back Chris Perry, the Bengals' first round pick in the 2004 NFL draft, giving the Bengals' running attack added dimension. By the end of the season, the Bengals finished with an 11-5 record, the team's first winning season since 1990. This was in no small part due to Johnson, who broke his own franchise record with 1,458 rushing yards and 12 touchdowns, while also recording a career high 23 receptions for 90 yards.