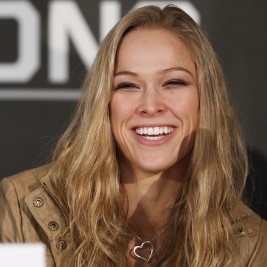 Businesses, Non-profit organizations, event planners and companies across the country have worked closely with our booking agents to hire Ronda Rousey for a speaking engagements, guest appearances, product endorsements and corporate events. Many of those same clients have continued to turn to our speakers bureau as we can easily align Ronda Rousey’s availability with their upcoming seminar, gala, annual conference, corporate function, and grand opening. Our close relationship with Ronda Rousey’s booking agent and management team further enables us to provide inquiring clients with Ronda Rousey’s speaking fee and appearance cost.

If your goal is to hire Ronda Rousey to be your next keynote speaker or to be the next brand ambassador our celebrity speakers bureau can assist. If Ronda Rousey’s booking fee is outside your companies budget or your unable to align with his appearance availability, our booking agents can provide you a list of talent that aligns with your event theme, budget and event date.

Ronda Rousey was born February 1, 1987 and is an American mixed martial artist and former judoka. She is the first and current UFC Women's Bantamweight Champion, as well as the former Strikeforce Women's Bantamweight Champion. She has finished all of her opponents by armbar in the first round. Rousey became the first American woman to earn an Olympic medal in Judo at the Summer Olympics in Beijing in 2008.

Rousey trains under famous fighters Gokor Chivichyan of the Hayastan MMA Academy and Edmond Tarverdyan of the Glendale Fighting Club. She formerly trained at the Olympic Training Center in Wakefield, Massachusetts under guidance of Jimmy Pedro and is now part of Team Hayastan in Santa Monica, California. Rousey also trains with Leo Frincu and Gene Lebell, along with Team Hayastan fighters such as Manny Gamburyan, Karen Darabedyan, Karo Parisyan and Sako Chivitchian. She is managed by Darin Harvey of Fight Tribe MMA. In July, 2012, Rousey enlisted former undefeated boxing and kickboxing champion Lucia Rijker as striking coach.

Rousey is the consensus #1 pound-for-pound female MMA fighter in the world, according to MMARising, MMAWeekly, and many other publications. She is also ranked #1 at 135 pounds according to the Unified Women's MMA Rankings.