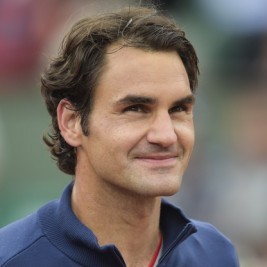 Businesses, Non-profit organizations, event planners and companies across the country have worked closely with our booking agents to hire Roger Federer for a speaking engagements, guest appearances, product endorsements and corporate events. Many of those same clients have continued to turn to our speakers bureau as we can easily align Roger Federer’s availability with their upcoming seminar, gala, annual conference, corporate function, and grand opening. Our close relationship with Roger Federer’s booking agent and management team further enables us to provide inquiring clients with Roger Federer’s speaking fee and appearance cost.

If your goal is to hire Roger Federer to be your next keynote speaker or to be the next brand ambassador our celebrity speakers bureau can assist. If Roger Federer’s booking fee is outside your companies budget or your unable to align with his appearance availability, our booking agents can provide you a list of talent that aligns with your event theme, budget and event date.

Roger Federer was born August 8, 1981 and is a Swiss professional tennis player who, as of March 2013, is ranked world No. 2 by the ATP. Many sports analysts, tennis critics and former and current players consider Federer the greatest tennis player of all time. He owns several men's world records of the Open Era: holding the world no. 1 position for 302 weeks overall; a 237-consecutive-week stretch at the top from 2004 to 2008; winning 17 Grand Slam singles titles; reaching the finals of each Grand Slam tournament at least five times; and reaching the Wimbledon final eight times. He is one of seven men, and one of four in the Open Era, to capture the career Grand Slam, and one of three to do so separately on clay, grass, and hard courts. Federer also shares the Open Era record for most Grand Slam titles at the Australian Open with Agassi and Novak Djokovic, at Wimbledon with Pete Sampras and at the US Open with Jimmy Connors and Sampras. Federer's ATP tournament records include winning six ATP World Tour Finals, winning 21 ATP Masters 1000 titles, playing in the finals at all nine ATP Masters 1000 tournaments, and being one of three players to win seven.

Federer has appeared in 24 men's Grand Slam finals, with ten in a row, both records, and appeared in 18 of 19 finals from the 2005 Wimbledon Championships through to the 2010 Australian Open. He is the only man to reach at least the semifinals of 23 consecutive Grand Slam tournaments, from the 2004 Wimbledon Championships through the 2010 Australian Open. At the 2013 Australian Open, he reached a record 35th consecutive Grand Slam quarter-final and a record 33rd Grand Slam semi-final. He has also won the most matches, 252, in men's Grand Slam tournaments. He also won the Olympic gold medal in doubles with his compatriot Stanislas Wawrinka at the 2008 Summer Olympic Games and the Olympic silver medal in singles at the 2012 Summer Olympic Games. He spent eight years continuously in the top 2 in the year-end men's rankings and ten in the top 3. His rivalries with Nadal, Djokovic and Murray making for a "Big Four", are considered some of the greatest of all time, in what is increasingly described as a "golden era" of men's tennis. Federer has won the ATPWorldTour.com Fans' Favorite Award a record ten times straight and the Stefan Edberg Sportsmanship Award a record eight times, both being awards indicative of respect and popularity. He also won the Arthur Ashe Humanitarian of the Year Award in 2006. In 2011, in a South African poll, he was voted the second most trusted and respected person in the world, next to Nelson Mandela. He was named the Laureus World Sportsman of the Year for a record four consecutive years. Federer is at times referred to as the Federer Express, shortened to Fed Express or FedEx, and the Swiss Maestro, or just Maestro.