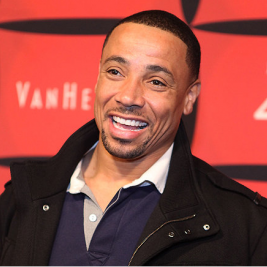 If your goal is to hire Rodney Harrison to be your next keynote speaker or to be the next brand ambassador our celebrity speakers bureau can assist. If Rodney Harrison’s booking fee is outside your companies budget or your unable to align with his appearance availability, our booking agents can provide you a list of talent that aligns with your event theme, budget and event date.

He was originally drafted in 1994 out of Western Illinois University and became a member of the San Diego Chargers' 1997 #1 ranked defense. He was an All-Pro Safety in 1998 and 2001, and also a pro bowler in those years.

Although no such records are kept by the league, he is believed to hold the record for most times fined by the league for unnecessary roughness or unsportsmanlike conduct. Notorious for his cheap shots, Harrison was voted the dirtiest player in the NFL by his peers according to a poll conducted by Sports Illustrated.

He arrived in New England in the offseason of 2003, taking the spot left vacant by Lawyer Milloy who went to archrival Buffalo. Harrison helped New England lead the NFL in scoring defense that year and second in 2004. In the 2003 Divisional playoff game against the Tennessee Titans, he intercepted Steve McNair, which set up Antowain Smith's touchdown as New England would go on to win 17-14. In the AFC Championship game the next week against the Indianapolis Colts, Harrison picked off Peyton Manning in the end zone and forced a Marvin Harrison fumble that teammate Tyrone Poole recovered. The Pats would stymie the offensive-minded Colts 24-14. He then went on to help New England beat the Carolina Panthers in Super Bowl XXXVIII, 32-29. He was injured late in the game.

The 2004 season showed another fine performance by the Charger exile. A few days before the 2004 divisional playoff game between the Colts and Patriots, Harrison dubbed Colts kicker Mike Vanderjagt the name "Vanderjerk" after the brash kicker said the defending champs were "ripe for the picking." New England went on to win the game by a score of 20-3. As this was against the NFL's number one ranked offense and MVP Peyton Manning who threw 49 touchdowns during the year, it was all the more impressive. Harrison intercepted Manning late in the game to remove the last chance Indianapolis had of scoring a touchdown. The next week in the AFC Championship, Harrison jumped a Ben Roethlisberger pass and took it 87 yards for a touchdown, helping the Patriots defeat the Pittsburgh Steelers 41-27. During the week leading up to the Super Bowl, Harrison got into a verbal feud with Philadelphia Eagles receiver Freddie Mitchell after Mitchell claimed he "had something for Harrison" and did not know the names of the New England secondary. Harrison and the Patriots made a statement in Super Bowl XXXIX, as he would record seven tackles, a sack, and two interceptions of quarterback Donovan McNabb, despite missing almost an entire quarter due to an injury sustained during the game. The second interception with ten seconds remaining in the game preserved a 24-21 Patriot win, ensuring a third championship in four years. Many Patriots fans believed that Harrison was snubbed for the 2005 Pro Bowl as Harrison had an incredible 141 tackles, two interceptions, three sacks, and held together a severely injured secondary.

In a game on September 25, 2005 vs. the Steelers, Harrison was hit in the knee by a falling Pittsburgh receiver and tore the ACL, MCL, and PCL in his left knee. Harrison was subsequently placed on the injured reserve list, ending his season. There are fears that it also may have ended his career at age 32.